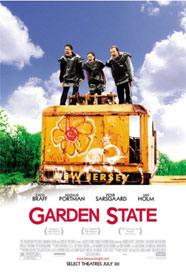 Synopsis:
Andrew Largeman (Zach Braff) shuffled through life in a lithium-induced coma until his mother's death inspired a vacation from the pills to see what might happen. A moderately successful actor TV actor living in Los Angeles, "Large" hasn't been home to the "Garden State" in nine years. But even with 3 000 miles between them, he's been unable to escape his domineering father Gideon (Sir Ian Holm) and the silencing effect he's had on his son from afar.

Stunned to find himself in his hometown after such a long absence, Large finds old acquaintances around every corner living quite unique lives as gravediggers (Peter Sarsgaard), fast food knights and the panderers of pyramid schemes. Meanwhile, at home, he does his best to avoid a long-simmering but inevitable confrontation with his father.

By a twist of fate, Large meets Sam (Natalie Portman), a girl who is everything he isn't. A blast of colour, hope and quirks, Sam becomes a sidekick who refuses to ride in his sidecar. He warmth and fearlessness give Large the courage to open his heart to the joy and pain of the infinite abyss that is his life.

My Verdict:
'Garden State' marks the directorial and feature-writing debut for Zach Braff and along with these, he also takes on the lead role. This is a very comprehensive collage of anecdotes that he collected and eventually drafted into a script that is quirky, funny, original and full of life.

As Andrew "Large" Largeman returns to his garden state hometown to attend the funeral of his mother, he happens upon old friends, old wounds and discovers new meaning to his previously anti-depressant vacuum filled life. Attending the funeral of his mother, Large even sees an old school chum is now one of the gravediggers waiting in the background to bury his mother once the official funeral proceedings are over, highlighting the peculiar twist his home visit is going to take. Peter invites Large to party, which ends up being a total drug/alcohol feast and makes Large realise that nothing here has changed in ten years. He quits all the depression related drugs his psychiatrist father has been prescribing for the last 10 years of his life and visits a neurologist just to make sure there really is nothing wrong with him, something he has suspected all along. It is whilst in the hospital, waiting for tests, that he meets the eccentric beautiful Sam, who will change his life and his way of thinking.

Zach Braff (looking very Ray Romano-ish) is fabulous as Large, delivering classic lines and picking out the idiosyncrasies and nuances of everyday life without judging them. Sir Ian Holm plays Large's father perfectly - a man lost to himself, distant and not knowing how to treat his only son. Peter Sarsgaard has the role of the hometown boy who wishes he had gone ahead and made good, but could only manage wishing for a different future. And the lovely Natalie Portman is Sam, the delightful, enchanting and often weirdly eccentric, odd character who takes to Large and accepts him into her world. 'Garden State' is an unconventional movie, stressing the importance of being who we really are and not who other people wish us to be. It is a remarkable debut movie that is one not to miss for its originality, freshness and unique approach.