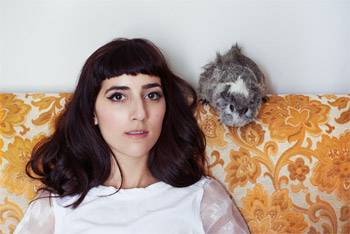 During The Fashion World of Jean Paul Gaultier the National Gallery of Victoria will be transformed into a late night destination for the return of its popular Friday Nights series.

Rone, from Melbourne street art collective Everfresh Studio, will lead a crew of street artists to create a spectacular backdrop for the music performances.

Tony Ellwood, Director, NGV, said, -Friday Nights offers an enhanced experience of The Fashion World of Jean Paul Gaultier with a focus on providing a social setting for people to catch up with friends at the Gallery. Visitors can see the exhibition after-hours in a different setting, while also experiencing some of the most innovative live acts performing today.'

Other programs and events in conjunction with the exhibition include opening weekend talks, an innovative lecture series titled A Colourful History of the Stripe, events for NGV Members and daily guided tours, with more events to be announced.

Tickets for Friday Nights at Jean Paul Gaultier are on sale now. See ngv.vic.gov.au for details.

The National Gallery of Victoria will be the only Australian venue for The Fashion World of Jean Paul Gaultier: From the Sidewalk to the Catwalk, which will feature more than 140 superbly crafted garments, in addition to photographs, sketches, stage costumes, excerpts from runway shows, film, television, concerts and dance performances.

The exhibition is organised by the Montreal Museum of Fine Arts in collaboration with Maison Jean Paul Gaultier, Paris.

NGV's Friday Nights return in style during The Fashion World of Jean Paul Gaultier. Meet with friends and enter a world of fashion and music as DJs and performers take to the stage, as well as pop-up talks, bars and dining.

JD Samson is best known as leader of the band MEN and for being one third of the electronic-feminist-punk band and performance project, Le Tigre. For more than a decade, JD's career as a singer, producer and DJ has established her work at the intersection of the music, art, activism and fashion. During that time she has toured the world, produced songs for Grammy Award-winning artists, written for publications such as Huffington Post and Creative Review, been photographed for Vogue Hommes, and engaged in direct support with a wide-range of progressive social and political causes.

Cibo Matto, formed by Yuka Honda and Miho Hatori, exploded onto the international music scene with two classic albums, Viva! La Woman (1996) and Stereo Type A (1999). Their live shows and albums were marked by wild experimentation, incorporating hip-hop, Brazilian music, African and Latin jazz and pop, and their collaborations have included artist and musician Yoko Ono and French film director Michel Gondry.  Spin music magazine featured their debut album in the '100 Best Albums of the -90s" list, and Time magazine as one of the 'Best Hip Hop Albums of All Time".

The music of Melbourne-based nine-piece Saskwatch explores music's ability to move the body and the mind. Drawing upon a diverse range of influences including Dr Dog, The Harpoons and the Bad Seeds, the recent release Nose Dive provides an upbeat extension of the band's first album Leave it all Behind, reimagining the group's early soul and R&B influences and taking their sound into new directions.

Combining Bollywood-inspired surf, disco and funk, The Bombay Royale have taken their unique sound to audiences throughout Europe, UK and the USA, where their performances have been met with astonishment and critical acclaim. Their second album, The Island of Dr Electrico follows the debut You Me Bullets Love which catapulted The Bombay Royale onto the world stage. The album was featured in iTunes Best of 2012, and #1 on the iTunes World Music charts.

Touch Sensitive is multi-instrumentalist, and self-confessed -synth-freak', Michael Di Francesco. His debut single 'Body Stop' was one of the first tracks released on Future Classic in 2004 and quickly became a cult favourite from East London to Brooklyn. In 2013, the release of the EP Show Me/The Pizza Guy, spurred over 1.7 million Soundcloud shares, more than 700K video clip views and #3 most played track of 2013 on Australian radio station Triple J. Touch Sensitive has featured at a number of music festivals including Harbourlife, Listen Out, Valley Fiesta, The Plot, and Falls Festival as well as across North America and Canada.

23-year-old Melbourne artist REMI is one of the fastest-rising Hip Hop acts in Australia. In 2013 REMI won the triple J Unearthed Artist of The Year J Award, performed to sold out audiences across Australia country, and supported international acts including Danny Brown and De La Soul. In June 2014, REMI released the album RAW X INFINITY to critical acclaim achieving 'triple j Feature Album of the Week' status and has since been nominated for a number of prestigious 'Album of The Year' awards.

Elizabeth Rose produces and writes electronic pop songs that are at once bright and moody, layering catchy melodies against shimmering synths and pulsing beats. In her short career, Rose has received a number of accolades. She won the SOYA Music Award, was selected for Triple J's -Next Crop' and won the FBi SMAC Award for -Next Big Thing'. The Good Life from her recent self-titled EP became the most played song at alternative radio. She has collaborated with producers from around the world such as Sinden, Flight Facilities and Aston Shuffle.

Frikstailers (pronounced -freak-stylers') rose from the eclectic Buenos Aires cumbia scene, turning the genre on its head with their unique style that saw Fader magazine describe them as "cumbia circuit-bent through neon dance tunes that interpret the most electric side of South America". The duo of Rafa Caivano and Lisandro Sona released their first LP En Son De Paz in 2013, and was recently chosen as one of the top 10 albums of Latin indie music of 2013 by the prestigious Spanish newspaper El Pais. Frikstailers released their new EP in 2014, showcasing an intense musical journey of 1980's synths and psychedelic sounds.

As HTRK (pronounced -Hate Rock'), minimal electronic-dub duo Jonnine Standish and Nigel Yang have earned high acclaim for their latest album Psychic 9-5 Club (2014), which embraces a sense of renewal and marks the beginning of a new chapter for the band since the passing of former band member Sean Stewart during the recording of their last LP, Work (Work Work) (2011).

Electronic and hip hop group Rat & Co, recently described by Tone Deaf as one of Melbourne's -best kept secrets', released their second album Binary in 2014. The album has been quick to receive critical recognition with BMA Magazine publishing it as -Album of The Issue'. It reached #7 in the iTunes Electronic Charts in the first week of release. In June 2014, Rat & Co joined Chet Faker on his national tour to promote the release of his #1 ARIA album -Built on Glass'.

Chicks on Speed work across Pop music, performance, installation and new media art. For over a decade, Chicks on Speed's founding members Melissa Logan (USA, Living in Cologne) and Alex Murray-leslie (Australia, Living in Barcelona) have worked between the worlds of music, art and fashion. Formed at the Munich Art Academy in 1997, they propelled themselves into the world of music, with a special mix of irony and electronic beats. Chicks on Speed have collaborated widely with artists and institutes as diverse as Thoughtworks, Douglas Gordon, Francesca Hapsburg, Red Hot Chilli Peppers, Karl Lagerfeld and ZKM's Peter Weibel. In recent years the group's activities culminated in a series of large scale live art performance, staged at international museums and art events, including the 55th Venice Biennale, Centre Pompidiou, Paris, and the Museum of Modern Art, New York.