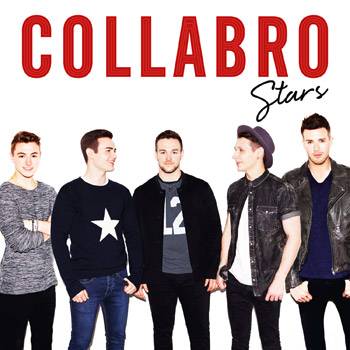 Sony Music Entertainment Australia is proud to announce Stars, the debut album from Collabro, is set for release on Friday October 31st. Collabro is the musical theatre boy band who charmed an entire nation and went on to win Britain's Got Talent earlier this year.

Collabro are Michael Auger, Richard Hadfield, Jamie Lambert, Matt Pagan and Tom Redgrave. Formed in early 2014 through mutual friends and social media, it has been a whirlwind nine months; from their first ever live show to a forthcoming appearance at the Royal Variety Show at the end of this year.

Stars features eleven much loved songs from musical theatre and film soundtracks, each one is exquisitely reworked in the contemporary style that has made Collabro such an instant hit.

Highlights on the album include a recorded version of -Stars', the song from Les Misérables that earned them a standing ovation from the Britain's Got Talent judges and the crowd, as well as the song that won them the final.

The album also includes -Bring Him Home', which was performed in the live semi-final, a rousing version of the Oscar winning -Let It Go' from the hit movie Frozen, alongside beautiful reworks of classic hits by the likes of Ryan Tedder and John Legend.

"Collabro captured the British public's love of musical theatre at just the right time. Each member's voice is outstanding, but hear them together and it's magic. They are a class act, and I am sure they can conquer the world," said Britain's Got Talent Judge David Walliams

'The moment I saw Collabro audition I knew we had found a special talent. I am so thrilled they are now achieving their dream. They are five genuinely lovely young men who are a credit to musical theatre," added Amanda Holden, Judge on Britain's Got Talent.