Synopsis:
Erin Gruwell (Hilary Swank) is a first-time teacher who wants to make a difference. She has little idea of what she's getting into when she volunteers to be an English teacher at a newly integrated high school in Long Beach, California. Her students are divided along racial lines and have few aspirations beyond basic survival. When Erin discovers how much of their lives are blighted by racial prejudice, she introduces them to books like 'The Diary of Anne Frank' and begins to educate them for real; a process that culminates in the idea that each of them, like Anne, will keep a journal of their innermost thoughts. Over time these underachieving students begin to bond into a family of sorts.

My verdict:
Does the fact that a story is true stop it from being riddled with clichés? Well, no. If you're looking to 'Freedom Writers' for a fresh new twist on this well-worn genre you will be disappointed. Inspirational moments? Check. Unorthodox teaching methods? Check. Students who teach the teacher the harsh facts of their lives? Check. A personal cost to the heroic teacher? Check. The fact that this story is true doesn't exactly let the film get away with anything but it does lend a sense of authenticity, which, oddly enough, might just be enough. These kids are involved in gangs, and violence is a very real part of their lives, but there's no scene in 'Freedom Writers' involving the teacher getting physical with anyone or students being held hostage by a crazed classmate high on crack. In not overplaying the details 'Freedom Writers' manages to make these characters more convincing than typical movie teens. Actually, when it comes down to it, most of these kids are suffering from pretty ordinary problems - poverty, divorce, loneliness, growing up. Their hardships are certainly exacerbated by gang culture but is this their cross to bear or simply a symptom of their disempowerment?

Swank excels at naïve and brave young women; characters carried away by a good-hearted dream, characters you can't help but love. In fact, she's done little else since her breakout role as the tragic Brandon Teena in 'Boys Don't Cry' (prior to that she mixed it up a little, like as a tomboy with a bad attitude in 'The Next Karate Kid'). Perhaps for the sake of her career she might make this her last such role for a while, but this is a good one. Erin is not a particularly brilliant teacher. All she really has going for her is her willingness to look unflinchingly at what her more experienced colleagues have turned a blind eye to, and actually try to do something about it. Whether or not you believe Erin Gruwell deserves to be immortalised as a great educator is not really the point. This was an ordinary person who happened to hit on something that affected a group of vulnerable people in a profound way. Hokey as it is, that's probably worth making a movie about. 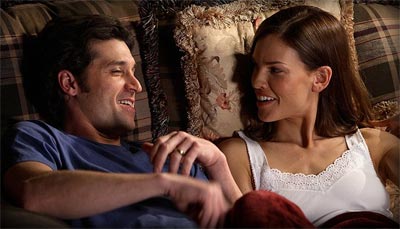