Stop fungal nail infection in its tracks this summer 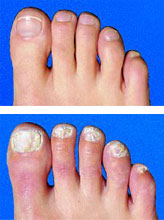 "Would your feet pass a road test for summer?"

With 1 in 10 Australian adults having thickened, brittle or discoloured toe nails - common symptoms of a contagious fungal nail infection or end stage tinea - which if left untreated could spread to other nails or lead to more serious problems, it's now time to "nail" fungal infection in its tracks.

This is according to Sydney Dermatologist, Dr David Wong, who warns that fungal nail infection, or 'onychomycosis' (on-i-ko-mi-ko-sis), is an infectious, often unsightly and sometimes uncomfortable condition that may affect a person's ability to perform daily activities.

"Fungal nail infection is not just a cosmetic problem. Rather, it's a common, contagious, sometimes painful, often frustrating and embarrassing condition which has little to do with personal cleanliness.

"Something as simple as knocking your finger or toe, trimming your nails too short or wearing tight shoes is enough to weaken your nail and expose the underlying nail bed to infection," said Dr Wong.

More than 500,000 new cases of fungal nail infection occur each year in Australia, although only 60,000 cases are treated at a cost of $30 million to the community. The condition affects almost twice as many men than women and its incidence is increasing among all age groups. It is more common among adults than children, affecting approximately 30 per cent of people aged 60 years or older. People with diabetes and compromised immune systems are at an increased risk.

Fungal nail infection occurs when a fungus spreads under the nail plate - through an opening such as broken, closely cut or ingrown toenails - causing damage to the nail and surrounding skin.
In the majority of cases, it is caused by a group of fungi called dermatophytes, which are also responsible for tinea of the skin (Athlete's Foot and / or ringworm).

"Athlete's Foot can lead to onychomycosis if left untreated. Also, some people are more prone to getting fungal nail infections than others," said Dr Wong.

The symptoms of fungal nail infection include discoloured (yellow, brown or white), thickened, brittle or crumbling nails. Some people also experience pain with the condition. As the infection progresses, the nail may become detached from the nail bed, while the skin surrounding the nail may also become infected.

"You can pick up a fungal nail infection of the finger nails and toe nails from any surface that skin scales can adhere to, most commonly carpet and matting," said Dr Wong.

"The infection is also commonly contracted in communal areas where people walk bare foot and the conditions are warm and moist, such as public showers and pools. Hotels and motels, school and workplace change rooms, public laundry services and the use of shared footwear, socks and towels also serve as transmission hubs."

Dr Wong says it is rare for a fungal nail infection to disappear on its own. That's why it's advisable to see your doctor for appropriate diagnosis and treatment.

"If your toe nails or finger nails are thickening, crumbling and / or discoloured, see your doctor, who can prescribe the most appropriate treatment, or podiatrist, or visit www.fungusfreenails.com."