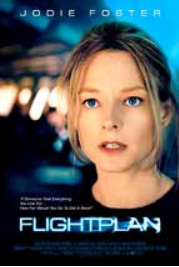 If Someone Took Everything You Live For... How Far Would You Go To Get It Back?

Synopsis:
You are flying at 37,000 feet, in a new state-of-the-art airliner…so how on earth could a child suddenly disappear from your plane? This nerve-shattering question lies at the heart of 'Flightplan', a visceral suspense thriller that transports the audience into the turbulent confines of an international flight - and puts them at the very centre of a chilling human mystery as they jet from Berlin to New York. Two-time Academy Award® winner Jodie Foster stars as Kyle Pratt, the frantic but fiercely intelligent mother whose deepest protective instincts will be triggered by a haunting in-flight nightmare: in the middle of the trans-Atlantic trip, her young daughter turns up missing without a trace. Or does she?

My Verdict:
In the thriller 'Flightplan', Jodie Foster stars as Kyle Pratt, an engineer working in Germany whose husband tragically dies and so she decides to head home for New York with her six-year-old daughter Julia, to bury her husband and try to re-build her life. Whilst flying across the Atlantic in a plane that Kyle helped design, Kyle discovers Julia missing and a token search fails to find her. Kyle becomes frantic and involves the cabin crew in her search and eventually the captain is brought in to solve the mystery. What ensues is a high-tension journey to determine if Julia ever existed or is she just the memory of a delusional woman?

Jodie Foster yet again proves her worthiness as a standout actor in a determined and very focussed role. She is gritty and tough as Kyle and totally believable as any mother could be when they discover their child missing. Her relentless determination to find her daughter leads her to stepping outside the boundary of a regular airline passenger as her inside knowledge of the multi-levelled E-474 Jumbo Jet becomes a positive force.

Peter Sarsgaard is air marshal Gene Carson who becomes responsible for Kyle as she eventually threatens the safety of the flight but he appears a little lazy in his role with perhaps not enough grunt. Sean Bean is okay as the frustrated captain, Rich, Erika Christensen is a novice flight attendant who manages to appear almost sympathetic to Kyle's dilemma and Kate Beahan is convincing as the more experienced, almost snobbish senior flight attendant Stephanie.

Most of the movie takes place on board the state-of-the-art fictional plane with a tense and slow build up towards a conclusion that is for the most part, hard to pick. So much time is spent wondering whether Kyle's child really exists that there is this constant doubt amongst the passengers and crew and indeed the cinema audience, which goes to creating enough interest to be almost satisfied with the ending. If it were not for Foster's performance, the outcome may well have been an anti-climax.

Overall, 'Flightplan' does have enough to satisfy and it manages to keep one constantly guessing and speculating which must mean there is something happening that is worth waiting for.