Synopsis: After a long and eventful life, Allan Karlsson ends up in a nursing home, believing it to be his last stop. The only problem is that he's still in good health, and in one day, he turns 100. A big celebration is in the works, but Allan really isn't interested, and decides to escape. He climbs out the window in his slippers and embarks on a hilarious and entirely unexpected journey, involving, among other surprises, a suitcase stuffed with cash, some unpleasant criminals, a friendly hot-dog stand operator, and an elephant (not to mention a death by elephant). It would be the adventure of a lifetime for anyone else, but Allan has a larger-than-life backstory: Not only has Allan witnessed some of the most important events of the twentieth century, but he has actually played a key role in them. Starting out in munitions as a boy, he somehow finds himself involved in many of the key explosions of the twentieth century and travels the world, sharing meals and more with everyone from Franco, Stalin, and Truman to Reagan and Gorbachev.

The 100 Year Old Man Who Climbed Out Of The Window And Disappeared
Release Date: August 21st, 2014 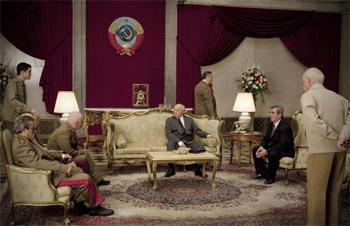 Question: How did it feel to make a film adaptation of such a successful book?

Felix Herngren: It is always difficult to adapt a book to film, says Felix Herngren, but I could not resist "The 100-Year-Old Man…" when I got the chance. It is a delightfully twisted story with rich characters, and situational comedy at its best. I know the expectations are high for the film, and this is of course tough, but I'd rather shoot a good story with high expectations, than an unloved story without expectations.


Question: What were your thoughts about the acting?

Felix Herngren: I wanted Allan to be portrayed by an actor who could do all the character's different adult ages in a credible way, says Felix Herngren. When I had read half the book, I began to think of Robert Gustafsson. To me he is the only one who would do the role with credibility and comic timing. When we tested him in complete makeup the winter of 2012, I felt he was a very good choice. Besides that, I love strong characters and good acting. I hope it all shows when you see the film.


Question: What is your vision for the film?

Felix Herngren: Allan Karlsson is doing what many of us westerners should do, says Felix Herngren. Do not worry about the future, use your gut instinct and do not fret over yesterday's troubles. If a fraction of the audience takes some of this to heart from the film, I will be very pleased.


The 100 Year Old Man Who Climbed Out Of The Window And Disappeared
Release Date: August 21st, 2014