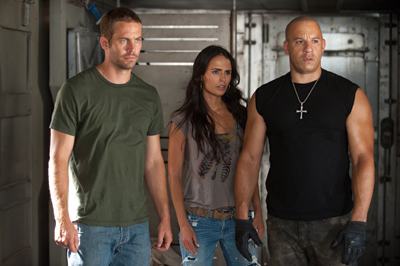 Synopsis: Vin Diesel and Paul walker return for the most thrilling action-packed film yet in the billion dollar franchise. In the latest chapter, former cop Brian (Walker) joins ex-con Dom (Diesel) on the other side of the law as the two former rivals become fugitives on the run.

In Fast Five (Fast and the Furious 5) Brian O'Conner (Paul Walker) partners with ex-con and old friend, Don Toretto (Vin Diesel) in a fast-paced race for freedom. Picking up were Fast and the Furious 4 finishes we see Brian and Mia break Dom out of a prison transportation bus and since then they have been on the run.

Fast Five is set in Rio de Janerio where the trio must complete their one last job, for freedom and $100 million. Dom and Brian collate a group of their friends to help them complete the job whilst they are on the run from federal agents and a corrupt businessman. Dwayne 'The Rock' Johnson joins the fifth movie in the franchise as the leading federal agent, determined to bring down Dom, Brian and Mia once and for all.

If you're a Fast and the Furious fan, Fast Five has everything you need including drifting, car chases, car drags, fight scenes, extreme action, violence, explosions and of course, bad behaviour.
Fast Five leaves audiences hanging on by setting up the perfect twist for an upcoming sixth installment.
Rating: ****
-Brooke Hunter