But she doesn't realise her sister, Hannah (Rosemarie DeWitt), is there for similar reasons, having just walked out on a seven-year relationship. Over tequila shots, Hannah and Jack get acquainted. When Iris drops in unexpectedly, complications arise in the form of rivalry and more than a few surprising revelations.

Mark Duplass: Set was a lot like camp. We all lived and worked on this massive, gorgeous property on the San Juan Islands off the coast of Washington state. We shared all of our meals, rewrote scenes until the wee hours of the morning, and all basically lived this movie 100% for a few weeks. It wasn't always easy, but we were definitely "in it."

Emily Blunt: It had a very loose, free-flowing, collaborative atmosphere to it, and there was a lot of laughter. We were under the gun a little bit because of the time frame. I think we had only about ten days to shoot the entire movie.

Rosemarie DeWitt: We were shooting 35 scenes a day. That made it very loosey-goosey, because you were doing a drunk scene, a sex scene, a ferry scene, and a biking scene all in one day! So it was loose but in the best possible way-in a way that really feeds creativity. Emily was jetting off to Alaska on her days off and I was coming back to Los Angeles to shoot a TV show, but when we were all there, it was cozy. I hate when actors say this, but it's true: It was a love fest. With the crew, too. Lynn had it right when she said she likes to kidnap her cast and crew and throw us together. We really were all in the movie together.

Mark Duplass: With "Humpday," we were sort of making up the process as we went. It was definitely a "babe in the woods" kind of experience. With this new film, Lynn and I had already established a work ethic together, but we were also bringing in two much more established actors, so it was a little terrifying for us. Almost like, "they're gonna find out we're just a bunch of frauds!" 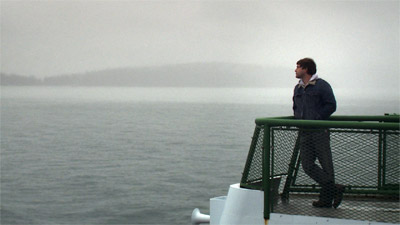 Emily Blunt: I found a lot of them quite hard, especially when you're dealing with exposition. One of my favourite scenes to do was the dinner with the three of us, when we were talking about skinny jeans and poofy pubic hair, which was so embarrassing.

Rosemarie DeWitt: It wasn't fun at all to improvise the big confrontation scene. But it was good because we did about 20 different versions.

Emily Blunt: I remember finding it exhausting, but I think it was good too because arguments are messy and completely fucked up. That's what was fun about it: We got the mess and bewilderment and weirdness of that moment.

Rosemarie DeWitt: It was the first time we weren't able to have two cameras rolling, where everyone's covered. So we are all kind of off our game in a way-but in a good way. My favourite scene to improvise-maybe because we didn't have any lines, really!-was the one where Jack comes back.

Emily Blunt: Oh, that was great. I cried.

Rosemarie DeWitt: We didn't have any idea what Mark was going to say. It was so beautiful because it was super honest. At that point, I think we felt like sisters because we'd been in it for a while, and it was right near the end. We got to hold each other and just listen to him, which was such a gift as an actor, when you don't have to work at it.

Emily Blunt: We really had no idea what he was going to say, so we just went on this journey with him in the monologue. I don't think I've had that experience before.

Rosemarie DeWitt: I haven't either. The great thing about Lynn and the way she works is that she'll use the take where it really happened in front of the camera, even if there's some weird shadow in the shot. She'll fix it because she'll go for what's raw and honest. Mark Duplass: Emily and Rose are unreal. You'll see in the film that they can handle the naturalism of improvisation, but simultaneously maintain what I like to call, subtly, their "movie star stuff." For example, they can casually throw away an improvised line with the best of them, but also be aware of where the lights and the camera are, and cock their head in just the perfect angle so the light hits their eyes when zing you with the climactic moment of the scene. It was honestly a huge learning experience for me. I felt outclassed in a lot of ways. 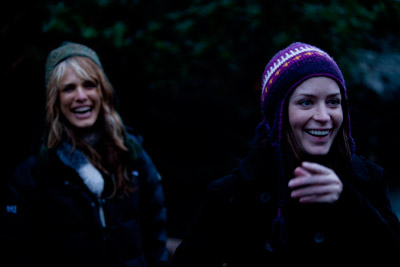 On crew and camaraderie

Emily Blunt: There was an epic night where we watched the original Conan The Barbarian (Laughs). It was in the boy crew's house. The room looked like some kind of opium den. They put cushions everywhere in the boys' cabin and everyone was lying around watching Conan and kind of mocking it, which was unfair.

I think Mark was in there with them. He was in the little girl's bedroom (laughs) and Rose and I had this opulent, amazing cabin all to ourselves. We were rattling around in there like ants.

Rosemarie DeWitt: And in our fabulous house, it was kind of cold-we had to leave our bedroom to go the bathroom every night. I would wait to hear your little feet go before I'd get up. We had some early 5am calls and I could kind of hear you in your room. I'd be like, "Is she doing it? Is she getting up?" Then I'd hear the little feet.

Emily Blunt: Ben Kasulke, our DP, was my favourite crew member, if only for the hair!

Rosemarie DeWitt: Although, sound recordist, Vinny's up there.

Emily Blunt: He is well up there. They're going to have to duel for our affections. In fact, I want that to happen. That has to happen immediately.

Rosemarie DeWitt: What was really amusing on set is that Emily kept doing impressions of her husband John doing impersonations of Maya Rudolph doing impersonations of Whitney Houston-and we all three were doing them between takes. Every time I did it those guys would make fun of me! I have the Peter Brady "When It's Time to Change" problem.

Emily Blunt: One night I came out of my cabin and I had a torch and literally ran straight into a massive stag. They're really big up close, and kind of skittish, like they might charge you. But in the middle of the night when you're walking back from the dinner area? Scary.

Emily Blunt: I have three siblings, and I have an older sister who's a year and a half older than me, so I think the competitive flair came from her, although now we're best buds. Growing up, she was always the most brilliant intellectual. She always excelled at things like math and science. What she'd say was, "Well what I didn't like was I wanted to be good at art and be able to do gymnastics like you." So I guess you're never happy-you want that little sliver of your sibling. But I think that wears off with age.

Rosemarie DeWitt: I have eight half brothers and sisters but didn't grow up in the house with them. So what I tend to draw on when I play a sibling-and especially in this movie-feels like sometimes the sister dynamics with my girlfriends. Even though you're all the same age, someone is the leader, someone is the little runt who's left out and it constantly shifts with the different groups that you're in. And I feel like I pull those friendships more than the ones with my real sisters because there's a huge age gap and we didn't fight over sweaters or boyfriends or anything like that.

Mark Duplass: [My Brother] Jay and I are lucky to have four years between us, so we didn't have any romantic conflicts. But, there's no doubt that the feeling of "what the hell would I do if something happened to Jay" infused my performance in this movie. I know firsthand what it's like to be closer to a sibling than most people can imagine. 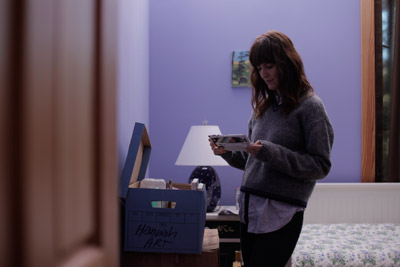 Rosemarie DeWitt: I went to a wedding once for one of my best friends. Her father stood up and said, "Well, so-and-so, she's your problem now" and sat down. I think it was meant to be a joke. She kept asking me later, "Did he really say that?"

Emily Blunt: (Gasping in disbelief) Oh ... my ... God. That's all he said? Oh how awful. I had good speeches at my wedding, I was really lucky. People excelled at making speeches.

Rosemarie DeWitt: You feel so loved when people take the time.

Emily Blunt: You do. You feel so loved.

Rosemarie DeWitt: Someone told me about a wedding where his wife was so worried she was going to cry - she'd written a speech and wasn't sure she'd get through it - so she had her husband bring a whoopee cushion. And he kept doing it through the entire speech, even though she was bawling.

Mark Duplass: I prepared for about 3 weeks to give the toast at Jay's rehearsal dinner. The pressure was on. "Oh, they're best friends. AND he's a writer! This is gonna be AWESOME!" I was ready to fucking nail it. Problem is, about 12 seconds into the speech I couldn't stop crying. It was heartfelt, but incredibly odd and highly unintelligible.