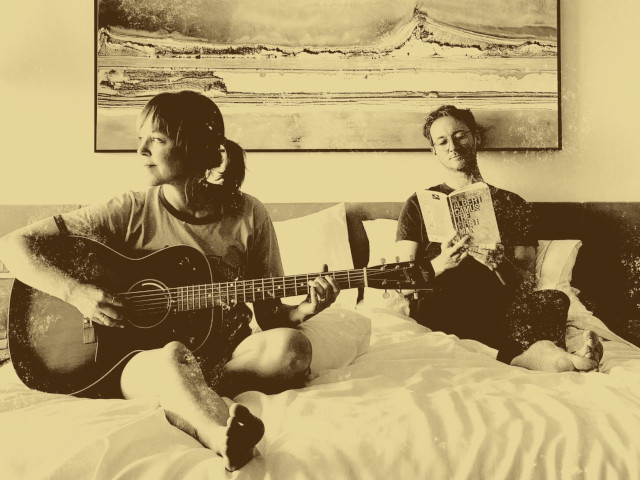 How would you get along with your partner if you were locked in one room together for fourteen days? That's the dilemma that faced Emily Barker and her husband Lukas Drinkwater when they finally made their first trip to Australia for almost two years. Forced to quarantine in a hotel room for two weeks in October 2021, they needed a plan.

The plan they came up with was to record an entire album...in Room 822.

With a guitar, folding bass, keyboard and recording gear on hand, Emily & Lukas set about turning their room in Perth's Westin Hotel into a recording studio.  The outcome?  An album full of tender, beautiful recordings featuring some of Emily's favourite Australian songs - from growing up through her teenage years in Western Australia to now.

Set for release on January 14, 2022, Room 822 sees the Australian born/UK based singer-songwriter & husband/producer/multi-instrumentalist Lukas covering songs from the likes of Nick Cave & The Bad Seeds (Push The Sky Away), Deborah Conway (Will You Miss Me When You're Sober), You Am I (Mr Milk), Kasey Chambers (The Captain), The Church (Under The Milky Way), The Waifs (London Still) and many more…including Emily's take on Paul Kelly's powerful, Sleep, Australia, Sleep - the first single to be lifted off the album.

Of the track, released on December 9, Emily says "Like most Australians, I'm a fan of Paul Kelly. I think of him as the Bob Dylan of Australia: a brilliant storyteller who never shies away from tackling the pertinent and sensitive issues of our times. He's consistently uplifted burgeoning Australian songwriters such as a young Archie Roach back in the 80s and, more recently, Jess Hitchcock.

In 'Sleep, Australia, Sleep' – released as a standalone single in 2020 – Kelly attacks the complacency held by corporations, government, and people in positions of power, with their stuck and endangering attitudes towards the climate crisis. The song is also an elegy to our precious native animals and plants: Australia has one of the highest rates of extinction in the entire world.

When it came to recording our version, I began by playing and singing it on acoustic guitar. In this stripped-back style, Lukas and I realised just how devastatingly sad the lyrics are – something which is perhaps a little hidden in Kelly's sardonic delivery and the waltzy, more uptempo production of the original. We initially intended to add double bass and lots of harmonies but realised this stark, unadorned version delivered the message with clarity."

To coincide with the album's release, Emily & Lukas will embark on their first Australian tour since 2017, taking in QLD, NSW, ACT, VIC, SA & WA.  You can also expect to hear songs from Emily's previous releases, including her recent critically acclaimed album, A Dark Murmuration of Words, which received glowing reviews both here and abroad and will be the first time performed here live.