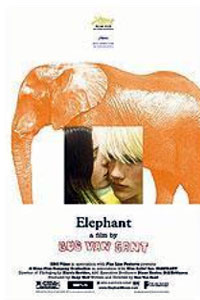 It's Happening So Fast
Synopsis:
Gus Van Sant's ('Finding Forrester', 'Good Will Hunting') new film takes us inside an American high school. 'Elephant' unfolds on an ordinary school day, filled with class work, football, gossip and socializing. For each of the students we meet, high school is a different experience: stimulating, friendly, traumatic, lonely, hard. And then something happens.


My Verdict:
'Elephant' chronicles the lives of a few 'typical' American teenagers at high school and follows them on a normal day. The camera follows them to school, into classrooms, into the canteen, at home, and just about anywhere they would go on a normal day. Alex is being driven to school by his drunken father, Elias is outside taking photographs for a school project, Brittany, Jordan and Nicole are busy gossiping, Michelle heads to the library at lunch all very hum-drum and pretty normal for high-school teenagers. It all seems fairly routine and very mundane. How could this possibly be entertaining? It is when you see what happens sometime after lunch.

Without giving away what does happen, I can tell you the event is extremely disturbing and it does involve some pretty heavy violent acts. Why these happen is never explained, but that is not the reason for the movie. The director and writer, Gus Van Sant says that this film is “just as a way to look at it'. Van Sant got much of his inspiration for his movie and also the title from a 1989 BBC production, 'Elephant', directed by the late British filmmaker Alan Clarke. Clarke's film depicted Northern Ireland sectarian violence as a relentless, anonymous march of murders, the title coming from a problem that is as easy to ignore as an elephant in the living room. Van Sant wanted a film that would merely be a depiction of an event without the need for reason and to that end he has succeeded. It uses real teenagers from Portland, Oregon, where Van Sant lives and was filmed over twenty days in November 2002.

'Elephant' is a very moving, alarming, upsetting and disconcerting movie but one that should be compulsory viewing.