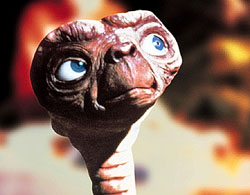 Our LA correspondent was one of the privileged journalists invited to the world premiere of Universal's restored 20th Anniversary edition of the beloved E.T. What with John Williams' live orchestral accompaniment, and an ultra-cool after-party, a good time was had by all.
One can think of worse things to do on a Saturday afternoon here in the City of Angels than attend the Red Carpet World Premiere of the 20th Anniversary edition of Steven Spielberg's "E.T. The Extra Terrestrial." A charity premiere on behalf of the Special Olympics, the stars were out at force to pay homage to a film that has truly stood the test of time. Made amidst the cynicism of Reagan's America, E.T still holds out as part fable and part social commentary on the anguishes of childhood, self-identity and acceptance, within the milieu of a childhood fantasy tale. The premiere was a special event, one of those wonderfully old-fashioned premieres rarely seen in Hollywood. Screened at the Shrine Auditorium, former home of the Oscars, one of the unique and truly memorable facets of the screening, was the unusual decision for the film's Oscar-winning composer John Williams, to conduct the film's score, live, throughout its screening. The seamless integration of the live orchestrations and the movie was such that very quickly one would forget that there was a live orchestra in the room, as all sound queues were remarkably matched.

The 20th Anniversary edition had been painstakingly restored, digitally remastered and some digital enhancements including an added scene made to this wonderful work. 20 years on, and it held up brilliantly, and the packed audience agreed, giving the film and Williams' magnificent work a standing ovation. At the conclusion of the screening, Spielberg introduced his now grown-up cast and some key crew members, thanking us, for once again, "embracing E.T with all our hearts." How could we not?

The after party was held in a large banquet room adjoining the Shrine, with E.T's famous forest recreated, and stations of food designed mainly for the plethora of children. Stars who walked around included the likes of Will Smith, Maria Shriver, Drew Barrymore and Spielberg, with Barrymore commenting on how much she once again "laughed and cried throughout the film."

E.T still holds up as one of the truly great classics of contemporary Hollywood cinema, an eloquent and richly thematic fable the timelessness of which was all too apparent as we sat through the film again with memories of childhood and innocence flooding back. A great film deserved to be screened like this, and Universal outdid themselves. As for E.T, he is still as adorable and as mystical as ever. The public can judge for themselves when the film releases in Australia on March 28.