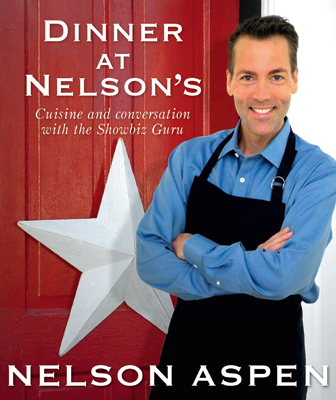 A talented cook and entertaining expert, Nelson Aspen shares some of his favourite showbiz dinner parties. Each fabulous menu is created from his celebrity pal's personal recipes, dishes from famous restaurants and Nelson's own archives.

Mouthwatering starters, mains and desserts are served with a side of showbiz glamour as you sit down for Dinner at Nelson's.

Nelson Aspem is one of Entertainment's most charming personalities in TV, radio, print and on-line. For three seasons, he was the Hollywood Producer/Reporter for TV Guide Television and frequent guest star on everything from celebrity news and talk shows to sitcoms and travel programs. He's contributed to a vast array of outlets, from news magazines Extra, Access Hollywood and Inside Edition to his own how-to series "New with Nelson!" Currently, he's juggling regular correspondent duties for a sixth consecutive season on Ireland's "The Afternoon Show," biweekly appearances on New Zealand's "Good Morning" and in his seventh year for Australia's #1 rated "Sunrise" as their Show Business Editor... bringing the latest in entertainment and pop culture to millions of viewers around the world, every morning!