Shimmering indie rock/pop up and comers Curly Blonde have dropped their latest single Room 309, a sun-soaked track which, despite its blissful exterior, deals with the feeling of being dissatisfied with how life has turned out. The duo have also released a video to accompany the track, perfectly in keeping with Room 309's exploration of monotony.

Evocative of Aussie indie faves Ball Park Music and The Jungle Giants, and mixed by Nicolas Mendoza (One Four, Delta Goodrem, A$AP Ferg), Room 309 is a strong, considered offering from this young duo – it's perfect for that summer roadtrip, and would fit in flawlessly at the sunset festival set. Bright guitar riffs bounce amongst upbeat percussion, while glistening vocals describe an unsatisfactory life – in spite of the optimistic instrumental. That's where the intrigue rests in this track; the fact that the lyrics are quite dark, in juxtaposition with the poppy arrangement, is fascinating. Speaking on the inspiration behind the track, Brynn explains, "Behind the rolling riffs, dreamy rhythms and vocals, the lyrics of the song stipulate someone who had such big imaginings for their life and set aspirational goals growing up, yet, they're extremely unsatisfied with how things have turned out and whether they can ever have a meaningful life. It's a pretty pertinent song, because I think most people in our age demographic are starting to realise and have thoughts along those lines, and the song captures a moment where you either make the move and live out those dreams, or whether you fall into the masses and go through the motions."

"Going through the motions" is a great descriptor for the video for Room 309, too. The clip shows the Curly Blonde boys sitting on the same couch, going through the motions of early-twenties life – trying to entertain themselves on a budget, and trying to keep from snapping at the friend at their side. Created entirely by themselves in COVID-19 lockdown in Victoria, the clip is the perfect representation of the theme behind Room 309, as Brynn explains, "The concept of the video clip was to capture the isolation and monotony of being stuck in the same place but wanting to get out of there. The video clip resonates really well with the song, because Room 309 is about someone having such high hopes for life, but not being able to reach any goals. The COVID lockdown situation sort of helped us in a way, because not being able to go anywhere and having to do the same things over and over again fitted so well into the music video."

Speaking of the COVID lockdown – in light of being stood down from their respective jobs, Brynn and Fergus of Curly Blonde were able to buckle down and work on their music together, as Fergus says, "Covid has actually helped us, in a funny way. We were both stood down from our jobs and the spare time allowed us to really come together and record this song and our upcoming debut EP. We felt that if life had continued in its hectic state, we wouldn't have been able to achieve as much as we have this year."

Curly Blonde: Our music is a blend of easy listening indie rock/pop, mixed with catchy hooks and good vibes. Personally, we love listening to heaps of different artists and sounds, so that's something we try to emulate in our sound, by creating music with a bit of variety. 'Room 309' is a very summery and guitar-driven song, but is quite different to some other tracks we've got on our upcoming EP. We hopefully have something for everyone.

Curly Blonde: Room 309 is a track that we've had floating around in our heads for about 2 years now, so it's really cool to have it recorded and released for people to listen to. We think it's a great juxtaposition between a really up-beat, summery, feel-good vibe – and a deeper meaning through the lyrics. The lyrics stipulate someone who had such high aspirations with their life and set aspirational goals growing up, yet, they're extremely unsatisfied with how things have turned out and whether they can ever have a meaningful life. It's a pretty pertinent song, because most people in our age demographic are starting to realise/ have thoughts along those lines, and the song captures a moment where you either make the move and live out those dreams, or whether you fall into the masses and go through the motions.


Question: What inspired the video clip?

Curly Blonde: The video clip was definitely Covid inspired, in that we were in the middle of a lockdown here in Melbourne and couldn't leave the house. The concept was to capture the isolation and monotony of being stuck in the same place but wanting to get out of there. Room 309 is about someone having such high hopes for their life, but not being able to reach any goals they set themselves. The Covid lockdown situation sort of helped us in a way, because not being able to go anywhere and do the same things over and over again fitted so well into the music video.

Curly Blonde: Like a lot of songs, each one of ours has different meanings and stories behind them, however overall, we just want to create fun and catchy music for people to listen to and enjoy! We both love bands that create music that is full of good vibes and are fun to listen to, so that's something we'd love for listeners to take from us. 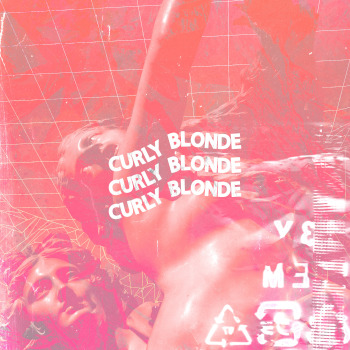 Curly Blonde: We love both! We love performing live and seeing people dig our music with a smile on their faces. However, we also really like the creativity and experimentation that can come from recording.

Curly Blonde: We wanted a name which cut through but also resonated closely with us. So pairing a physical feature of us which is really distinguishable like our hair is one aspect of the name, but it's also a name which we thought people would look at with intrigue and wonder what sort of act we might be. Guess we can't change our hairstyles too much now though!


Question: When did you guys start creating music together?

Curly Blonde: Officially as Curly Blonde, it was around the start of this year. However, we've been jamming and creating our own stuff for about 5 years now, so for us, things haven't changed too much from that point of view.

Curly Blonde: We'd probably have to say seeing awesome Aussie bands like The Jungle Giants and Ball Park Music at music festivals, has really inspired us to create music and gives this a crack. In a live set you can see how much passion they have for playing music, and that's really encouraged us to back ourselves and create our own stuff.

Curly Blonde: How competitive the music industry really is. There's so many talented artists across the Australian music landscape, and we really hope that our music can reach the level that these awesome artists have set.

Curly Blonde: We wouldn't say we're musically successful yet as the biggest challenges are still yet to come. In terms of leading up to now, the biggest challenge faced has probably been learning to not worry about what other people might think of our music and just backing ourselves in!

Curly Blonde: A typical day lately has been very covid-lockdown affected unfortunately, but looks something like this: get up, have a nice cup of tea with breaky, check the veggie patch and the sunflowers, backyard cricket, lunch, backyard cricket, jam/record session, get out for some exercise, more backyard cricket on return, cook dinner, practice Tik Tok dances, eat dinner, have another cuppa, jam, go to bed, rinse and repeat.

Curly Blonde: We're loving just making tunes for people to listen to; we love seeing or hearing that people like our stuff.

Curly Blonde: The release of our debut EP! We've got this one locked and loaded for release on the 25th of November. We can't wait to get that out for people to listen to. Hopefully places in Melbourne keep opening up and we can play some live shows too, but until then we'll be creating a recording some new stuff!