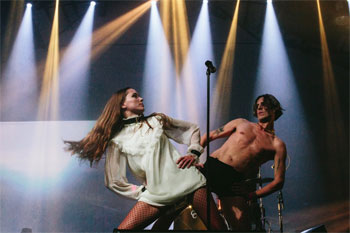 It's been a month to remember for Confidence Man. They debuted at Glastonbury, were one of the most talked about bands at The Great Escape and Dot to Dot festivals, sold out their first ever UK show at Moth Club, performed at Curve Ball as part of Vivid Sydney and will soon be playing at Splendour in the Grass for the first time. Today the sassy four-piece have unveiled the fantastically good fun, slightly sadistic video to their first track, -Boyfriend (Repeat)', a track which Annie Mac made her New Names Track of the Week on BBC Radio 1 this week.

Directed by Berlin based Schall & Schnabel the very simple, but hugely effective stop frame video plays out the songs themes on an increasingly battered and bruised -Ken and Kevin' (Barbie's boyfriends in case you were wondering). The band's Janet Planet said about the making of the video, 'We haven't played with Barbies for a while, but it seemed like the right time to get my old Ken dolls out."

Confidence Man blew minds at Golden Plains earlier in the year where many gave them the Golden Boot and the accompanying viral video showed punters swarming to the stage to -get down' to their infectious debut -Boyfriend (Repeat)'. Following that were to multiple sold out shows for their Hard Candy tour in Melbourne, as well as Sydney and Brisbane. They released their second single 'Bubblegum' in February which immediately went on high rotation on national radio as well as community stations around the country.

They've been a triple j unearthed Feature Artist and 2017 Ones to Watch act, played on the Townsville leg of Groovin the Moo, won a coveted triple j unearthed spot at Laneway Festival Brisbane, and have played The Plot, Panama, Golden Plains, Hot Dub Wine Machine and By The Meadow festivals.

Confidence Man continue to justify the hype as one of Australia's best new acts.