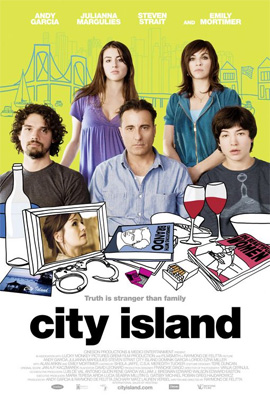 Synopsis: City Island is a hilarious and touching tale about a family whose comfortable co-existence is upended by surprising revelations of past secrets and present day lies. Vince Rizzo (Garcia), a family man who makes his living as a corrections officer, longs to become an actor. Ashamed to admit his aspirations to his family, Vince would rather let his fiery wife Joyce (Margulies) believe his weekly poker games are a cover for an extramarital affair than admit he's secretly taking acting classes in Manhattan. When Vince is asked to reveal his biggest secret in class, he inadvertently sets off a chaotic chain of events that turns his mundane suburban life upside down.