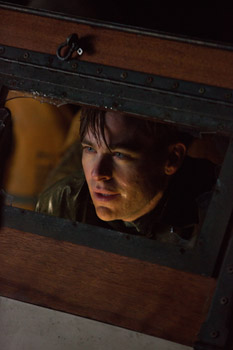 On February 18, 1952, a massive nor'easter struck New England, pummeling towns along the Eastern seaboard and wreaking havoc on anything caught in its destructive path, including two 500-foot oil tankers. The SS Pendleton and SS Fort Mercer, bound for Boston, Massachusetts and Portland, Maine, respectively, were both ripped in half, trapping their crews inside. For the senior officer aboard the stern of the Pendleton, first assistant engineer Ray Sybert (Casey Affleck), he quickly realizes that it is up to him to take charge of the frightened crew and encourage them to work together to keep the ship afloat for as long as possible. 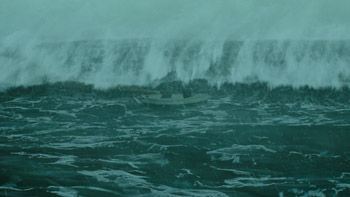 The U.S. Coast Guard Station in Chatham, Massachusetts was busy helping local fishermen protect their boats from the storm when they received word that the damaged ships were adrift in nearby waters. Warrant Officer Daniel Cluff (Eric Bana), the recently-appointed station chief, immediately dispatches the CG 36500 lifeboat under the command of Captain Bernie Webber (Chris Pine) to search for survivors. Webber and his crew of three men on board the 36-foot motorized, wooden lifeboat, set off on the perilous mission with bleak prospects at best, and before they even clear the harbor, the boat's windshield and compass are destroyed. Yet the men persevere, and despite hurricane-force winds, 70-foot waves, frigid temperatures and zero visibility, miraculously locate the Pendleton and rescue 32 of its 33 men in the midst of the turbulent storm. Facing the worst of Mother Nature, they head back into the belly of the beast, returning a total of 36 men home on their battered 12-seat lifeboat.

'The Finest Hours" is packed with thrilling, larger-than-life action sequences and it is anchored by the strong central theme that resonates throughout the story"the strength of the human spirit. 'It is an uplifting story about people accomplishing something with great, noble intentions because it was their job," says producer Jim Whitaker. 'I really believe in movies that are about hope, and that is ultimately what this film is about."

Producer Dorothy Aufiero agrees, saying, 'These young men knew exactly what they were getting into when they climbed into that tiny lifeboat. They had the courage to go out there and put others' safety first and do something incredible, and I find that truly inspirational."

The SS Pendleton rescue was front-page news at the time, but not everyone today is familiar with the story, including families of the men who were part of the rescue itself. 'These guys just didn't talk about it because to them, it was their job," explains Aufiero.

Recreating their gallant efforts on the big screen was the perfect way to tell the world their unforgettable story, and with a story like this where the real facts are so compelling, the filmmakers were committed to remaining faithful to the actual events. Director Craig Gillespie says, 'We wanted to be very specific, very clear and technically accurate with events involving the real people in the story. Being able to get those nuances and truths make the story all the more interesting while allowing us to present unique and authentic individuals."

Of the many people closely involved with the February, 1952 rescue mission, only two are still around today, Coast Guard engineers Andy Fitzgerald and Mel 'Gus" Gouthro. Fitzgerald, who was the Coast Guard third-class engineer, stepped in for his friend and senior engineer Gouthro, who was sick the night of the rescue, remaining in the Chatham Coast Guard station. Both men, still friends to this day, were engaged by the filmmakers in the early stages of development to help ensure all the facts and details were authentic. Both men have never forgotten that historic night, remembering it like it was yesterday.

'Some people still look at the Pendleton rescue as a suicide mission, but I never saw it like that," says Fitzgerald, who is now 84 and lives with his wife in Colorado. 'Like we used to say back then, -You have to go out, but you don't have to come back.' Our job was to save people and that's what we did, and I'm damn proud of that."

Adds Gouthro, 'When people ask me about the Pendleton what I try to impress on them is that it really was no big deal to these guys. Those four men went out and did their job. They didn't like it...it's not like they were having a good time out on that lifeboat, but it's what they were told to do so they went out and did it."

Audiences will undoubtedly be captivated by the visual spectacle of the Coast Guard's legendary maritime rescue in 'The Finest Hours," but the compelling characters brought to life on screen are exceptional in their own right. The humility and selflessness characteristic of those in the service of saving lives is truly notable, and the producers wanted to ensure that the actors cast could effectively convey those qualities on screen. 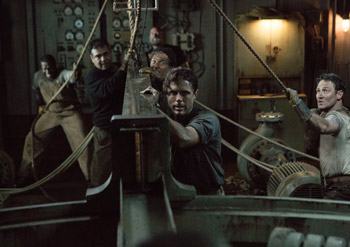 Chris Pine is Bernie Webber, the honest, amiable coxswain who pilots the CG 36500 lifeboat, becoming an unlikely hero. Native Bostonian Casey Affleck plays Ray Sybert, the mid-level crew member aboard the SS Pendleton who suddenly becomes the man to whom everyone looks for guidance. Ben Foster is Richard Livesey, a veteran Coast Guard seaman who, despite his reservations about Bernie's leadership abilities, volunteers to join him on the mission. Holliday Grainger is Miriam, the telephone operator engaged to Bernie who worries about the safety of her fiancé, and John Ortiz is seaman Wallace Quirey, a veteran of the Pendleton crew. Eric Bana plays Warrant Officer Daniel Cluff, the commander of the Coast Guard Station in Chatham when the storm hits.

Rounding out the cast are Kyle Gallner ('American Sniper") as Andy Fitzgerald and John Magaro ('Unbroken") as Ervin Maske, the two men who volunteer to join Bernie Webber and Richard Livesey on the 36500, and Beau Knapp ('Southpaw") as engineer Mel 'Gus" Gouthro, who is too sick with the flu to join his friends on the mission.

Principal photography on 'The Finest Hours" took place in southeastern Massachusetts on stages built at the Quincy shipyards and at locations along the coast south of Boston including Marshfield, Duxbury, Cohasset and Norwell. The final days of shooting took place on Cape Cod in Chatham. 'We had always hoped to film this picture in New England where the events actually took place," says Dorothy Aufiero, the film's Massachusetts-based producer. 'Being able to visit the historic sites where Bernie Webber and his crew did their jobs was an extraordinary experience for everyone involved."

From day one, production designer Michael Corenblith and his team knew they had their work cut out for them. In addition to building the interiors and exterior of an enormous T-2 tanker, they created a Cape Cod town from the -50s. 'We began by looking at every archival source that we could find, but because this story is so rooted in nautical history it was crucial that we also work closely with the Coast Guard to have access to their materials," says Corenblith.

The actual CG 36500 lifeboat skippered by Bernie Webber to rescue survivors from the SS Pendleton, still exists, and the actors actually had the opportunity to take the real boat out in the harbor near Chatham. The production leased original life boats for use in scenes of the lifeboat departing on its rescue mission and returning safely with the 32 survivors from the Pendleton.

Some sequences were filmed in Chatham's Stage Harbor, filling in for the Chatham Fish Pier, which today, looks nothing like it did in 1952. Others were filmed on stages constructed at what was once the Fore River Shipyard in Quincy, where the production built a tank which was 80" x 110", 14" deep and held approximately 800,000 gallons, which allowed the special effects team to start and stop the waves, wind, rain and snow on command. Ironically, the winter of 2014 was one of the coldest on record for the East Coast, with temperatures dropping as low as 14 degrees Fahrenheit on some nights when the actors were submerged in the tanks for hours at a time"Mother Nature gave the actors an authentic recreation of the conditions the night of the rescue.

The production shot at the actual Coast Guard station in Chatham from which the rescue mission departed 63 years ago, instilling a sense of realism for the actors. Chris Pine explains, 'There's this great photo of Bernie and his men sitting at a table in the mess at the station that was taken that night after their return, and we filmed in that actual spot."

Director Craig Gillespie also filmed for two days on the USS Salem, a decommissioned Cold War-era heavy cruiser, which has a boiler plant and engines similar to those on the Pendleton. Filming on the Salem, which is now a ship building, history and heritage museum docked in Quincy, took place in multiple areas of the ship, including the #3 engine room, the diesel generator room and the port mid-ship's passageway, among others. 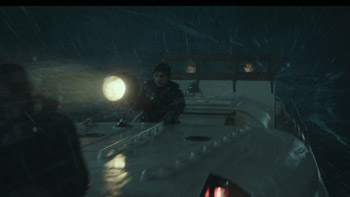 To recreate interiors of the doomed stern on the SS Pendleton, Corenblith and his team constructed a series of sets varying in scale, which included the ship's galley, mess and crew quarters, the steering station and the engine room. The art department also integrated real parts from the USS Salem, like hatches and doorways, into the incredibly-detailed sets. For the exteriors of the ship, Corenblith constructed a set made up of the three deck levels where the majority of the action takes place. 'It was extraordinary to see a set of this size," says Gillespie, 'Especially when we were able to add in the rain, water cannons, dump tanks and gimbal."

'The Finest Hours" celebrates man's will as his greatest weapon. These young men with different levels of experience, or lack thereof, conquer their own fears and face some of the most destructive forces of nature imaginable to accomplish the unthinkable.

'It's a very simple story about these guys who have a job, and it just so happens that on this day their job requires them to go out into the belly of the beast," says Chris Pine. 'It wasn't done for glory and there wasn't a self-aggrandizing vibe to it…it was just men doing their job."

Adds Casey Affleck, 'It's a real story about real people and what they are capable of doing, and how saving their own lives and the lives of others helps them to understand and appreciate their own strengths."

Jack Ryan, as a young covert CIA analyst, uncovers a Russian plot to crash the U.S. economy with a terrorist...

Come behind the scenes of the epic journey Troy with Eric Bana & Brad Pitt.

Stage 12 at Universal Studios is a long way from Melbourne, but sitting in this soundstage, Aussie Eric Bana is...

Eric Bana is the first to admit that he was surprised when he was offered the part of King Henry VIII in The...