Cheri Moon has been at the forefront of the music scene for most of her life and is not slowing down anytime soon. The singer/songwriter and actress will be releasing a self-written female pop anthem entitled "Ain't I A Woman" on March 8th, 2021 in honor of International Women's Day.

The song was inspired by the Sojourner Truth speech of the same name, which Cheri was introduced to in high school. Cheri's Grandma helped her gain a deeper understanding of the speech, which details the suffrage of Sojourner and the women she fought for. Cheri then performed the speech for her entire school during Black History Month and other events/festivals around her hometown of Memphis, TN. When the uncertainty of 2020 struck, Cheri revisited the speech and decided to create a song with the same powerful message. The lyrics are meant to restore hope and shine a light on the amazing triumphs of leading women in the world right now. Women such as: Kamala Harris (becoming VP), MiMi Aung, (leading NASA ingenuity), Dr. Kizzmekia Corbett (the Black scientist behind Covid-19), Janet Mock (Transgender activist), Dr. Shirley Jackson (leading top scientific researchers), amongst so many other amazing women. All of which are breaking down barriers, rewriting history, and leading the path to a limitless future for women. Cheri continually preaches these same values to her two daughters.

Born and raised in the music capital of Memphis, TN, Cheri began singing Gospel with her family choir at just 8-years old. Her musical ambitions eventually drove her to the New York club scene for 10 years, where she began performing regularly at the historic CBGB's and Tribeca Grand Club. Her songwriting skills earned her a publishing contract with Producers Timbaland and Jimmy Douglass. Since then, songs from her catalog have been licensed for numerous national commercials and TV shows – including popular soap operas like "All My Children," "The Young and the Restless," and many HBO shows. Additionally, a few of her songs co-written with British star Roisin Murphy (Moloko) were released by EMI Europe on his acclaimed album "OverPowered". Cheri also co-wrote the epic ballad "Great Escape" for Kevin Rudolf, and has co-written songs with The Scipt's lead singer Danny O'Donoghue.

Not only known for her popular dance hits, Cheri is also a highly regarded artist in the Family Music Community and as a Voice-Over Artist. She has become well-known for her enchanting children's songs released under the artist name 'SnookNuk'. She was recently included in social justice musician Fyütch's "Black Women in History", which reached #1 on the Sirius Radio Kids Music Charts. While Cheri's voice-over work can be heard on MTV's "Making of the Band" and national commercial campaigns for McDonald's, Herbal Essence, and Dr. Pepper. Cheri has additionally been seen acting in a number of indie films, and hopes to continue to inspire others through her art in the future.

Cheri Moon: I describe my song 'Ain't I A Woman' as a soulful Pop track. My music in general is Pop, but because of the vocals, it has an R&B/Soul flavor. But then some tracks are very much a clubby vibe, it'll send you into a dance/disco zone!


Question: Can you tell us about Ain't I A Woman?

Cheri Moon: 'Ain't I A Woman' is an inspirational women's anthem that I wrote to inspire myself and all women around the world to continue to fight for what they want in their lives and also celebrate womanhood and all their accomplishments.

Cheri Moon: I really hope to inspire with my music. I want to encourage, and with some songs I want them to dance, so it's all feel-good music :-).

Cheri Moon: I really LOVE performing live! Putting on shows is my favorite. I love costumes and dressing as you can tell by my 'Ain't I A Woman' video where I portrayed many roles that women have in their lives. I enjoy the process of putting it all together as well whether it's a show or a shoot. I love fashion, so performing helps me to incorporate one of my other passions. I love the process of recording too, but it's just a different vibe altogether.

Cheri Moon: Hmmm, that's hard because I would like a lot of people. The producer would be Swiss Beatz as I'd love to work with him and the artist maybe Tina Turner as she is one of my idols and she seems so down to earth! 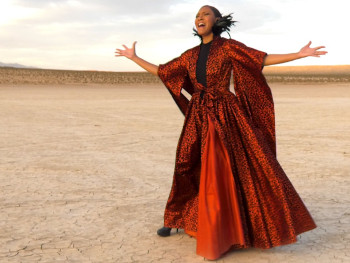 Cheri Moon: My mood has to be right for sure. Sometimes it takes me to change different environments to get inspired. When I want to write something emotional, I usually need quiet and some space, but if I'm writing an upbeat, pop, or dance track then it's party time, and I like things to be going on around me. Sometimes I drive around just to get inspired and do random things when I'm out.


Question: How does it feel to have worked with artists like Timbaland, Missy Elliot and The Script?

Cheri Moon: Having had the chance to record with Timbaland, record and write with 'The Script' and be a part of a girl group that Missy Elliot was working with was an amazing experience! Being in the studio with these talented creatures was a huge blessing for me because it really was like being in a college of performance arts. I witnessed super artists and they're all like mad scientists when in the studio, it's incredible. I learned so much from them during this process and it definitely helped me become a better songwriter for sure. A lot of the stuff I recorded with Tim and his team were mostly for pop groups, but there's a couple of songs I co-wrote and recorded with Danny from the "The Script' that I may still re-vamp and release. I love those songs still, so we'll see.

Cheri Moon: Dua Lipa is one of my favorites as she just makes me want to dance, which I love doing. Adele, Lana Del Rey, and 'Black Pumas' are my new craze! But mostly, you can find me listening to classics!

Cheri Moon: I've sung in churches, competed in talent shows, etc. most of my childhood. I love music and come from a very musical family. I always used to love watching artists that had elaborate shows and concerts. I really get a kick out of it and I still do. I think singing and performing have always been a part of my DNA. I CAN'T NOT do it.

Cheri Moon: One moment that I'm really happy about is having the chance to perform at CBGB's right before they closed. It's such a classic place to perform in Rock & Roll history.

Cheri Moon: When I hear my song on air, I almost go into shock mode. I'm super excited but still, I'll stand in disbelief for a minute. It's always so surreal. I'm so grateful when I can have any breakthroughs.

Cheri Moon: My favorite part of being a musical artist honestly is when someone tells me that my song has touched them in some way, encouraged them, or it has helped them to do something that was challenging. That for me is the best because then I don't feel like all my music is purely indulgent.

Cheri Moon: My days vary because I have kids, but for the most part, I'm always busy whether I'm writing, recording, or I have performances, which nowadays have been via Zoom. Then, I juggle family things as well, but I try to hike as much as I can and do yoga or meditation. This helps to balance me. I'm a Libra, so I need that balance.

Cheri Moon: Next, I'm looking forward to the world opening up again and doing live shows. I am also excited about more new music I'm releasing and some collaborations coming up. Not only with my Pop music but with my family music I do as SNOOKNUK. I've had a few small roles in a couple of movies and looking forward to doing more of that too!