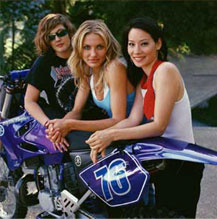 These Angels Still Have Wings

The angels are back and having a wow of a time. Focussed, funny and gorgeous PAUL FISCHER had a tough time chatting to Drew, Cameron and Lucy, who are intelligent, funny and somewhat pleasant on the eye.

Any idea that ANY tension at all existed amidst the trio of superstars who are now Charlie's Angels, were put to rest. Promoting the new sequel Full Throttle, very much in unison, stars Cameron Diaz, Drew Barrymore and Lucy Liu were in top form. Gone is the giggling and hair-braiding that seemed to define their interviews for the first film. Here they are focussed and the friendship that exists among these three powerful Hollywood beauties seems genuine. No wonder we are al anxiously awaiting news of a third Angels movie not that our angelic trio would give anything away. 'We don't know yet because we just worked so hard to make the first one,' says Barrymore, who is also producer of the sequel. 'We all love being together so much though that we're together anyway, so work or play, either or is good for us. I think right now, we want to see how people react to this one, but it's very amazing because we don't ever go into press junkets asked about a sequel, let alone- - I don't even know what to call it.' Liu interrupts giggling. 'Trilogy. I'm a geek. I know the words for everything. When we were doing press for the first movie, the first thing people asked us was, 'Is there going to be a sequel? Is there going to be a Charlie's Angels 2?' before anyone asked us any questions about any part of the movie. To have that encouragement and that's what we take it as, encouragement, is great. I don't think anyone asked me about Ecks vs. Sever 2, so, it's really nice. We also discovered yesterday or last week that this is the first sequel for all of us, which is kind of a cool thing because we got to experience that for the first time. If we get the opportunity to work together again on something else, that would be fun too,' says Liu. Liu adds that it is Barrymore, producer, who was able to unite the three as a cohesive team. 'She gives you the freedom to feel like you can come in and be a part of something, so not only do you feel that way creatively, but you feel that way and it translates to the team effort and the teamwork.'

As for adding Demi Moore to the mix, Barrymore knew she always wanted the semi-retired star for the pivotal fallen angel role. 'We just really championed her altogether. We believe that she was supposed to be the person. We never again in that way of thinking about other people, the focus was always on her and eventually with collaboration and, you know, what kind of character do you want to play? We have these guidelines; will you please come work with us? She saw our passion. We worked very diligently with her and it all worked out and was the best experience.'

While the first Angels film, from first-time director McG, took its share of risks, Full Throttle goes even further, blurring the line betweenself-deprecating satire and full on sexuality, but being a PG-13 movie, they had to be careful of how much was TOO much. 'The ratings board is a tricky thing,' says Barrymore. 'Everybody makes the movie and has a goal of how much of a wide audience they want to have come in. We really wanted to be inviting to everyone and went so far out of our way to try to make it un-alienating to anyone. I think there are different aspects that different people will enjoy and we're really glad we got away with what we got away with the ratings board because they're very diligent, they're very tough on action; and very tough on sexuality.' Diaz goes further. ' Another thing too is that the angels basically, whether it's at the CSI moment where we go look at the crime scene and we all have like our disguises on, or the Pussycat Dolls where we did the burlesque dance, they commit to it 100 percent. They do it all the way so that wherever they're at, whoever's witnessing them do it, they don't even question whether or not they're supposed to be there because they're doing it to the best of their ability which is whether it's hacking a mainframe of one of the largest computers in the world or dancing on a floor or spinning around in a champagne glass,' she says. Adds Drew: 'And it's so much fun to be that capable and that committed and that confident and yet show how imperfect they are and flawed and human in their personal lives. That's the kind of balance and tone that s so important to us.' Diaz also denies that the film's sexual tone is underplayed. 'It's on a very minimal sexual level. I think that even the burlesque moment was really playful and not too revealing. Certainly I was wearing more clothes in that than I was when I was wearing a bikini, but definitely, it's just all in context.' Diaz also insists that at no time were they asked to go too far. 'I think everything was pretty reasonable that they asked.' So what about the unrated DVD version we are hearing rumours about? 'It's not unrated,' insists Barrymore, laughingly. 'Trust me, I would know. There's going to be some things on the DVD that we had to cut out of the ship's hull sequence because the action was actually too explicit ' Adds Liu. 'There was some blood, it was grittier. You'll see blood flying out of Dylan's mouth when she pummelled in the scene.' But the excessive violence that audiences will see on the DVD is not something that the angelic Diaz necessarily approves of, ironically. 'Personally, I don't like watching violence. I'd much rather see more skin.' Any of us would agree.

In Full Throttle, the Angels are as tough and empowering as you would expect, perhaps the perfect role models for the young women who will flock in droves to see the Angels do battle second time around. The whole role model question is always prickly, but our three heroines ponder and discuss exactly what kinds of role models these characters really are. 'I think that in a way we're not showing girls something that they aren't capable of, right now,' insists Diaz. 'The angels aren't out there going, 'By the way, this is who you should be and this is where women are going to end up.' I think we're holding up a mirror to women right now and saying that this is who you are, what you're capable of, and what you are doing at the present time. Women are capable of doing so many things these days, physically, emotionally, within relationships and career. There are so many things that women have evolved into and I feel really proud about where women are right now. I think we're just sort of holding up a mirror to them, so, I feel good about that aspect of it, as far as encouraging or inspiring young girls to know that that are coming up, seeing and learning that hey, that's possible. I feel really good about what we're putting out there and about whom the angels are and I feel confident that we're giving them something that is completely reasonable as far as the idea of what these women are, rather than taking it literally.' Liu agrees. 'I think that it's not so much the idea of oh, you have to go out there and be a spy or be able to kick people around but the idea of a woman who is committed to her job, to what she loves doing, to what she wants to do and at the same time, with all the characters and personalities that are represented in the second and that we get to sneak into and look at, it's not easy. You can't have everything without trying to balance. The word balance is about the idea of finding the fulcrum and to know that you're going to work to succeed, as a man or woman.

Barrymore sums it up perfectly, however. 'Morals and nudity united.'