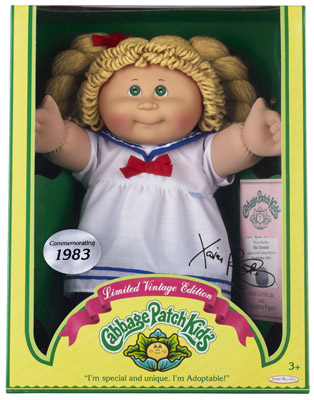 Meet the newest delivery to the Cabbage Patch, the Limited Vintage Edition kids. Commemorating the original 1983 launch, the Vintage kids are styled to match the first ever Cabbage Patch Kids.

Just like the ones everyone used to collect, the Limited Vintage Edition kids have wool hair, stitched soft bodies and original 80s fashions. These kids will really remind you of yesteryear. When Cabbage Patch Kids launched in the 80's, they were so popular that many stores sold out within weeks, sometimes hours, of the Kids hitting store shelves.

With more than 124 million Kids adopted since 1983, Cabbage Patch Kids are one of the world's most iconic toys. The Kids continue to strike a chord with parents and children as one of the most recognizable and beloved children's properties of all time.

Each loveable 'Kid' comes with its own special name, adoption papers and birth certificate. Cabbage Patch Kids are ready to be adopted by you and become part of a loving home!