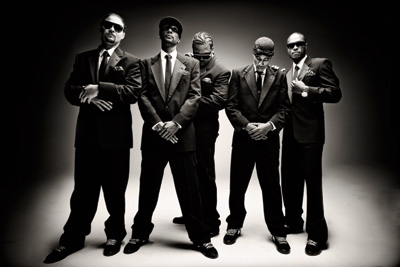 The rise of Bone Thugs-N-Harmony is a classic example of the American Dream - a group of five young men who had a goal and would not allow any barriers to stop them from attaining it. Layzie Bone, Krayzie Bone, Wish Bone, Flesh-N-Bone and Bizzy Bone went from being broke, hungry and homeless in 1993, to watching their unique brand of fast-paced, flowing, rapid-fire, harmonized rap, dubbed the Cleveland Sound, hit the top of the charts. With over 30 million albums sold worldwide, and tracks recorded with some of the most respected names in the business including 2Pac, Notorious B.I.G, and Mariah Carey to name but a few, Bone Thugs-N-Harmony are back with a new album entitled Uni-5: The World's Enemy.

In 1993, Eazy-E signed the group to Ruthless Records and they released their remarkable debut EP Creepin' On Ah Come Up in 1994. The lead single Thuggish Ruggish Bone became one of the most requested songs of 1994 and shot to the top of the R&B and Rap Charts, making it a US summer anthem. Amid the fervor, the Cleveland rap group entered the studio immediately and emerged with the album E 1999 Eternal. The album topped the charts and spawned the worldwide smash hit single Tha Crossroads which won the group a Grammy, and took on an unexpected meaning following the death of Eazy-E. In fact the single was so popular that it tied the Beatles 32-year-old record for the fastest rising single and remained at the number one spot for 8 weeks in the US.

In the time leading up the long-awaiting release of the double-album Art of War in August 1997, Bone broadened their reach, putting out an album as Mo Thugs Family featuring a roster of the group's peers. They followed this up with The Art Of War which spawned two hits Look Into My Eyes, and If I Could Teach The World. Bone Thugs then took a break as a group and various members released solo albums - Bizzy Bone's Heaven'z Movie (1998), Krayzie Bone's Thug Mentality (1999), Flesh-N-Bone's 5th Dog Let Loose (2000) -- two more Layzie Bone-executive produced Mo Thugs Family albums -- Chapter II: Family Reunion (1998), Mo Thugs III: The Mothership (2000) -- and a best-of album: The Collection, Vol. 1 (1998). In early 2000, the group released their critically acclaimed comeback album BTNHResurrection.

Bone Thugs-N-Harmony remain one of the most popular groups in hip-hop and continues to have a devoted cult following to this day. The group put Cleveland, Ohio on the hip-hop map and was one of the first major acts to come from Midwest. With one hour and 20 minutes of all their classics, plus tracks off the brand new album, this promises to be a classic show for all lovers of hip hop.