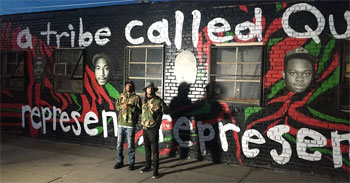 Bone Thugs duo Krayzie Bone and Bizzy Bone, promised fans that they would release visuals to support nearly every song from their recently-released album, New Waves - and they are staying true to their word. Today, they drop a fourth visual - "Change The Story" featuring Uncle Murda. The visual's backdrop features murals of legendary fallen artists including, The Notorious B.I.G. and Sean Price set in Brooklyn, and Jam Master Jay and Phife Dawg in Queens.

"This is one of those songs that's close to my heart," says Bizzy. "How many of us wonder, what it would be like if the story changed and we could have a loved one back, if only the circumstances had been different? It meant a lot for us to recognise some of the great fallen soldiers of hip hop history who left us too soon. I could feel their energy as we filmed in front of those murals."

New Waves, which was released on June 23rd, features an array of special guests, including Yelawolf, Eric Bellinger, Tank, Jesse Rankins, Jazze Pha, and Stephen Marley, among others. Additionally, all five members of Bone Thugs-N-Harmony appear on the track "Waves."

Together Krayzie Bone and Bizzy Bone have taken on the shortened, straight-no-chaser moniker Bone Thugs for their long-in-the-making, tag-team release New Waves. The star-packed, 14-track project is yet another chapter in the rich history of the five-man troop.