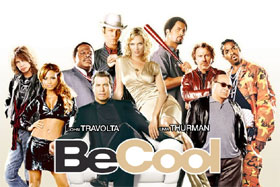 Everyone is looking for the next big hit

Synopsis:
John Travolta is back as Chili Palmer in 'BeCool', a sequel to the smash hit 'Get Shorty' (1995). This time, Chili becomes a different kind of "hit" man - he abandons the movie industry to bring his wise guy skills and negotiations tactics to the music industry.

When a friend is offed while they are having lunch, Chili takes the opportunity to visit the guys wife, Edie (Uma Thurman), and pitch himself as her new business partner at an independent record label. With a promising young pop-star-in-training as his protégé (Christina Milian), Chili has to juggle her faux-urban manager (Vince Vaughan), his gay, wannbe-actor bodyguard (The Rock), Russian mobsters, and an eloquent gangsta music producer (Cedric The Entertainer) to save the label and land a hit - and keep from getting popped himself.

My Verdict:
Chili Palmer is back. But just who is Chili Palmer if you haven't seen 'Get Shorty' (1995)? Turns out, in 'BeCool' he is a movie producer who turns to music to utilise his skills and is played by John Travolta who performs one of the slickest, coolest not-a-hair-out-of-place characters, routine for Travolta but still great to watch. And therein lies some of the problem of 'BeCool' - if you haven't seen 'Get Shorty' should you have, as it takes a while to get to know just who some of the characters here are, as does figuring out the rather jumbled narrative?

Travolta is just one of the countless stars who line up here, some for small cameos, others in lead roles. Teamed with Travolta is Uma Thurman, who plays Edie, the record label owner wife of Palmer's recently killed friend. Travolta and Thurman are excellent on-screen as a team as they try to out-smart the opposition even when up against some cunning and conniving resistance, lead by Harvey Keitel and Cedric The Entertainer and their respective cohorts. Travolta and Thurman are trying to establish a new star (Christina Milian), but come up against all kinds of obstacles, which gives the opportunity for some of the cast to show off their skills. Try to imagine The Rock playing a gay minder, would-be actor who has this amazing ability to raise one eyebrow on call. This is just treat to see. Vince Vaughn also has one of the larger roles as a seriously fashion deprived manager.

'BeCool' is a real mixed bag. It is a fast paced movie, sometimes too fast, has some brilliant one-liners but is also very confusing at times, especially near the beginning. But then again, why not follow up the hugely successful 'Get Shorty' with a sequel? Gather a plethora of Hollywood talent, use the same formula and you've got another hugely successful movie. 'BeCool' will be successful because of the talent, the humour and slickness but not for its chaotic story because that is one area that hurts this otherwise great movie.