Synopsis: Summer,1980. Barbara, a doctor, has applied for an exit visa from the GDR (East Germany). Now, as punishment, she has been transferred from Berlin to a small hospital out in the country, far from everything. Jörg, her lover from the West, is already planning her escape.

Barbara waits, keeping to herself. The new apartment, the neighbours, summertime, the countryside – none of that means anything to her. Working as a paediatric surgeon under her new boss Andre, she is attentive when it comes to the patients, but quite distanced toward her colleagues. Her future, she feels, will begin later.

But Andre confuses her. His confidence in her professional abilities, his caring attitude, his smile. Why does he cover for her when she helps the young runaway Sarah? Does he have an assignment to keep track of her? Is he in love? But as the day of her planned escape quickly approaches, Barbara starts to lose control. Over herself, over her plans, over love.

In the films of recent years, East Germany has often appeared quite desaturated. No colors, no wind, only the gray of border crossings and the fatigued faces, much like those of the blearyeyed passengers on the sleeper inter-zonal trains at Gera's railway station.

We didn't want to film a portrait of an oppressed nation and then juxtapose it with love as this innocent, pure and liberating force. We didn't want any symbols. You just end up decoding them and what's left is what you knew all along.

We watched several films in preparation. One of the films that deeply impressed us was To Have And Have Not by Howard Hawks. Two lovers, Bacall and Bogart, suspiciously eyeing each other, who cheat and lie, with secret police all around them and so constantly forced to speak between the lines. Strangely enough though, they can both handle it and they enjoy watching each other deal with the situation: the elegance, the intelligence, the precise skirmishes of their dialogues, as though seemingly ignited by the censored and controlled world around them. You clearly see how circumstances can produce new types of people who kiss, speak and look differently.

Another film that impressed us was Fassbinder's The Merchant Of Four Seasons. The East Germany of the Fifties is so present in this film: in the split rear window of a VW Bully, in the echoing emptiness of a bare backyard, in the cramped confines of a formica kitchen. It's never a backdrop, but more of a spatial experience where people love, argue and become silent. And this atmosphere thick with loving, arguing, and silence just sticks to everything and remains hanging in the air and on the walls. The past never passes but extends far into our present.

We wanted to capture on film that specific space between people, with everything that has built up, ev 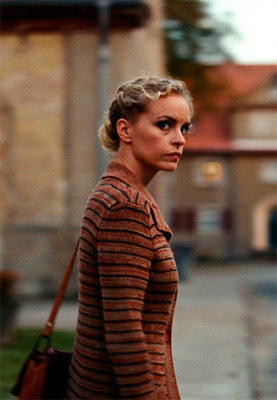 erything that had made them so mistrustful, everything they trust, reject and accept.

During the rehearsals, one of the actresses who had wanted to leave East Germany at the end of the Seventies, using the excuse of a tour theater performance in the West to flee, recounted how she had accepted dinner invitations knowing she would not be there for them. She would be gone, forever. And this terrible loneliness that remains, because you will never return and the life you had will have disappeared. The famous Anna Segher's line: 'When you lose your past, you won't have a future." She still feels it in her bones, she revealed, to this very day.
Christian Petzold

Christian Petzold's Barbara is a story about people who meet in a state of high alert; about a truth that only exists because of a lie, and a love that is wary of itself; and about the freedom to leave and the freedom to stay.