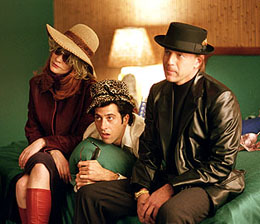 Synopsis: The suave, irresistable Joe (Willis) and his hypochondriac partner Terry (Thornton) have escaped from prison. Cutting a swath from Oregon through California, these fugitives rob banks in order to finance their scheme for a new and somewhat legitimate life south of the border. In their wake, they leave a trail of chaos, disguises, wrecked automobiles and an adoring public. Their operation is running smoothly until they have an unexpected run-in with Kate, who is drawn to the thieves as a way to escape her ordinary life. Together Joe and Terry are the most successful bank robbers in U.S. history. To Kate, they also combine to make the perfect man. Things get more complicated when the police and media assume that Kate is their hostage and organize a massive manhunt to save her from the clutches of Joe and Terry.