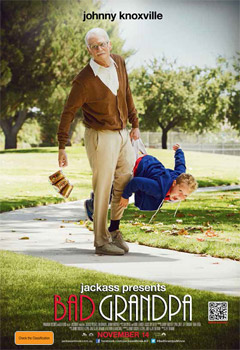 Synopsis: 86 year-old Irving Zisman is on a journey across America with the most unlikely companion, his 8 year-old Grandson Billy in "Jackass Presents: Bad Grandpa". This October, the signature Jackass character Irving Zisman (Johnny Knoxville) and Billy (Jackson Nicoll) will take movie audiences along for the most insane hidden camera road trip ever captured on film.

Along the way Irving will introduce the young and impressionable Billy to people, places and situations that give new meaning to the term childrearing. The duo will encounter male strippers, disgruntled child beauty pageant contestants (and their equally disgruntled mothers), funeral home mourners, biker bar patrons and a whole lot of unsuspecting citizens.

Real people in unreal situations, making for one really messed up comedy.

Verdict: Bad Grandpa tells the story of Billy whose mother is going to jail which only leaves his Grandpa to drop him off to his deadbeat dad, which calls for a road trip! Hilarious, convincing and always unexpected, Jackson Nicoll is amazing in his portray of the character of Billy.

Johnny Knoxville was crude and rude, as always but his transformation into 86 year-old Irving Zisman was truly phenomenal.

There isn't a lot to say about the film except that I laughed so hard I thought I was going to explode and that was just in the first five minutes… My favourite scene by far was the pageant, the look on the actors and audiences faces, was outstanding.

I love the shock factor this movie created for the unsuspecting audiences and thoroughly enjoyed the entire film, so much I'm ready to see it again, already.