Aubrey Haddard Green As Ever 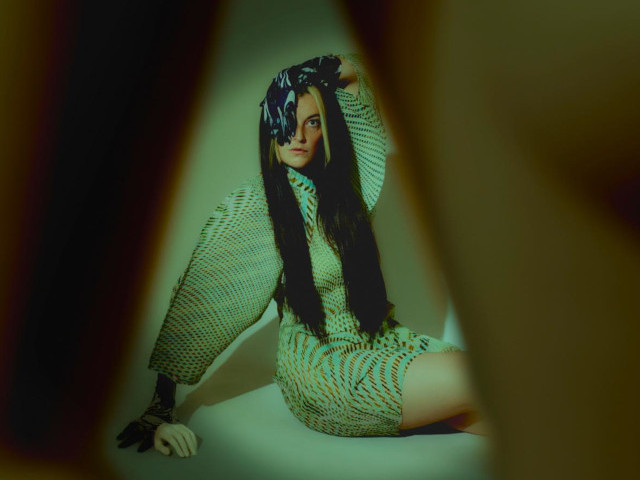 New York City-based indie-pop singer-songwriter, Aubrey Haddard releases her effervescent second single, "Green As Ever" today, along with its accompanying summery music video. Haddard's second full-length album, Awake And Talking, will be out August 19, 2022 and is available for pre-order now, via Beverly Martel Records.

The project's first single, "Just A Wall," which premiered with The Line of Best Fit, saw Haddard examine her own reflection and begin to find self-acceptance. The Line of Best Fit wrote that it's "sublime, emotive and anthemic," and that "Aubrey Haddard channels Orpheus."

Similar to "Just A Wall," "Green As Ever," sees Haddard continue to draw on themes of mythology within her lyricism. Haddard's airy vocals float over a synthy beat, "According to mythology we play a role / Don't tell me when the summer ends / I'll be gone."

After reading Michael Pollan's book The Botany Of Desire and learning about human relationships from the perspective of plant care, Haddard found herself crafting what "Green As Ever," would later become. Haddard explains, "In the summer of 2020 I traded my shared, Brooklyn two-bed for a mattress on the floor of my childhood home in the Hudson Valley where much of the record was written. Matt Peiffer (Awake And Talking mix engineer) had lent me his copy of The Botany of Desire, in which Michael Pollan discusses the reflection of human desires in the way that we interact with plants. We've learned how to manipulate them in every way so they become only the best, only exactly what we want."

Referencing the song's lyrics and subject matter, Haddard wonders if she can mold her life exactly the way she desires, as humans do to plants. Haddard says, "According to mythology we play a role." And when that role comes knocking on my door, don't expect me to answer. Maybe I am destined for something, but maybe I'd rather just run from it. Maybe I could manipulate my life in every way so that it is exactly what I want it to be, or maybe I'll just throw up my hands."

Haddard teamed up with Josh Rob Thomas again to direct the track's summery, dance-filled music video. Wrapped in nostalgia, "The video was shot on the street I grew up on," says Haddard. "It was a leap of faith, with choreography being the focal point. The song is really an ode to summer and I wanted to reflect that in a juvenile way."

The video sees Haddard among lush trees and tall grass, running down her empty, rural street from her childhood, as the sky transitions from day to night. There's a boundless, carefree energy that Haddard emits in the video that captures the essence of the song's message. As she runs, she rids herself of any attachment–blooming both fiercely and independently–on her own terms.

"Green As Ever" is just the second taste of the second nine-track LP out this summer coming from Aubrey Haddard. Awake And Talking, puts Haddard's self-examination on full display as she navigates the nuances of love and her relationship to art, and wrestles with existential questions through various lenses. While producing the album, some of the great songwriters of the late 90's and early aughts–everyone from Stereolab and Oasis, to Björk and the Cocteau Twins–were in Haddard's heavy rotation as their conceptual songwriting and harmonic approaches provided plenty of inspiration. With writing partner and multi-instrumentalist Charley Ruddell and drummer Josh Strmic, the trio came together in places of comfort like their weekly rehearsal space, Haddard's childhood home upstate, and their home studio to create this collection of songs throughout the year before tracking them over the course a week in the summer of 2021. Now with a more mature, renewed perspective, Haddard's intimate yet audacious sound is both self-assured and delicately fearless.

"Awake And Talking is about seeking a sense of purpose," explains Haddard. "It challenges perception - how many ways can you look at the world before you find your place in it? It is about destiny and the journey to self-acceptance. And, like anything I create, it is about my own personal experience over the past few years. This record makes me feel powerful and confident in the face of uncertainty and it brings me a lot of joy to know that it could offer a sliver of that to anyone listening."

After attending Berklee College of Music and releasing her debut album Blue Part, Haddard went on to win both Vocalist of the Year and Singer/Songwriter of the Year awards at the 2018 Boston Music Awards. In the next two years, Haddard spent time both as a headliner and as a support act, gracing stages at Firefly, Mountain Jam, Waking Windows, and a slew of other premiere festivals in 2019. She has opened for several globally recognized bands, including The Dip, Ninet Tayeb, Lawrence, Liz Cooper & The Stampede, and The National Reserve. In 2020 and 2021, Haddard released four one-off singles–"Thin Line," "Sweeter the Honey," "Portuguese Red," and "National Tragedy," leading her to today's most fully realized work yet.

Haddard has already made a splash as praise has poured in from several leading tastemakers. Glide Magazine says, "between her guitar playing and vocal strength, Haddard is definitely an artist we will be catching as soon as we can," while Atwood Magazine wrote Haddard's music is "blissful and bubbly indie rock... perfect for a daytime dance party."

"Green As Ever," allows Aubrey Haddard, from Mother Nature's earthly embrace, to take on a nuanced perspective of nurture, while she explores her ability to tend to the garden of her life in just the way she'd like. The bubbly, delicate mythology-inspired indie-pop tune "Green As Ever," is out everywhere now. Haddard's forthcoming second LP, Awake And Talking, arrives August 19, 2022 via Beverly Martel Records, and is available for pre-order now. Find Aubrey Haddard on Instagram, Facebook, and YouTube and stay tuned for much more from the rising musician.