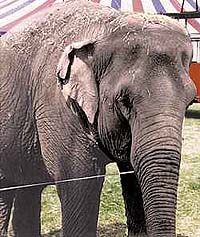 ARNA is a female elephant who has existed at Stardust circus without others of her own kind for over four years. Her partner Bambi died in mid 1996.

Arna is in her mid forties and has been in a circus most of her life. Last year Animal Liberation accompanied Dr. Roger Mugford, an animal behavioural expert from the United Kingdom to Stardust circus. Dr. Mugford captured video evidence and wrote a report which was delivered to the Department of Agriculture showing many breaches to the Exhibited Animals Protection Act (EAP). The most obvious was that keeping a single elephant is in direct contravention of the E.A.P.

Some of his other findings of ARNA concluded that:


Dr. Mugford advised strongly that the circus be closed on the grounds of inadequate provision for its animals and many areas of public safety concern.

The circus went into overdrive given the publicity generated and in a cynical display Arna received her first "bath" in a very, very long time. While the cameras were still rolling. The attention devoted to Arna waned however once public attention was no longer focused on her. The Department of Agriculture was swamped with calls, faxes and emails from the public and their token response was that "Arna has bonded with her keepers and it would be cruel to remove her."

Most circus elephants are chained by at least two legs for 95% of their lives in a space no larger than an automobile. They are unchained only to perform. The natural behaviour patterns of the elephant, which have evolved over thousands of years, are denied by this confined, chained, and dominated life. To disrupt and prevent the natural behaviour of these intelligent, social creatures is not only inhumane and cruel, but stressful to the individual animal as well.


ALL FOR ARNA: TAKING THE NSW GOVERNMENT TO COURT

As it is ILLEGAL to keep a lone elephant, Animal Liberation is taking the NSW Government to court to remove Arna from the Stardust circus. What this will mean for Arna is that she will be free to roam around, which is something she hasn't done in nearly 50 years as she's spent most of her life chained by the ankle. To keep an elephant on its own is one of the most heartless things a human can do to an elephant.

A win will impact worldwide on the practice of keeping large exotic animals locked up for no better reason than to 'entertain' someone.

To make a donation in support of this cause, click on the link below: