We are pleased to announce the new Giorgio Armani and Emporio Armani Spring/Summer 2019 campaigns.

For the occasion, Giorgio Armani renews the creative collaboration with his sister Rosanna Armani, with whom he had worked extensively in the past on the production of memorable images, made of cinemalike atmospheres and evocative situations. In the spirit of continuity, the photographers chosen for the campaign are Kurt Markus and Enrique Badulescu, whose work has been showcased in some of the best pages of Emporio Armani Magazine. 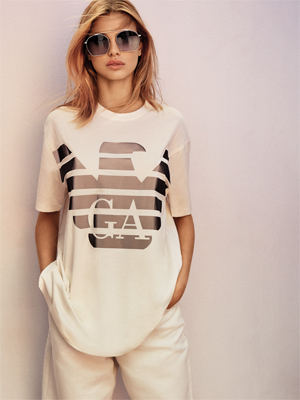 In their different styles, the campaign photographs reassert with contemporary spirit the essence of the style of the two labels: the natural, sophisticated elegance of the Giorgio Armani collection and the fresh and dynamic attitude of Emporio Armani.

The Giorgio Armani campaign, photographed by Kurt Markus, takes the Armani imaginary world outside the abstraction of the photographic studio, between dunes and reflective water pools: a setting pervaded by a vague exoticism enhances the flowing softness and the colours of the collection. The protagonists of the ethereal, timeless shots are the models Charlee Fraser, Daga Ziober, Shu Pei, Maxime Daunay and Zhao. The frames are imbued with an intense evocative power. The result conveys calm and elegance.

Shot in Ibiza by Enrique Badulescu, the Emporio Armani campaign features models Emily Gafford, Romy Schonberger, Dasha Khlystun, Aleksandar Rusic, Andrè Bona and Ton Heukels. The signature style of the images are the colour intensity and the physicality of the poses, enhanced by bold frames and the subtle geometry of the composition.

Architectures, poses and clothes mix in combinations of chromatic complementarity, emphasised by soft light and a pictorial quality.

The same photographers created this season's eyewear campaign, which complements the narrative.

The campaigns will be launched in the international press in January.