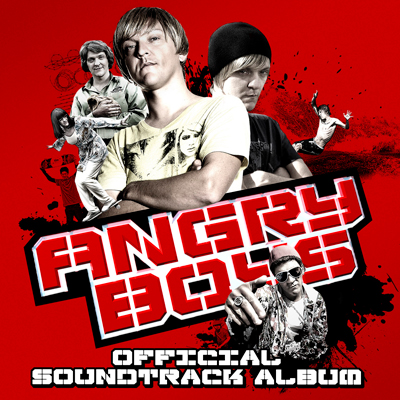 Available digitally, the album features a huge track listing of music performed by our favourite characters from Angry Boys and written by Chris Lilley.

The official soundtrack album also includes 19 videos with exclusive, never-before-seen footage from the TV series. Videos include extended versions of S.mouse's notorious film clips such as 'Slap My Elbow', 'Animal Zoo' and 'Poo on You', as well as the full length 'Bedroom Rap' from Daniel & Nathan Sims.

Along with all the music from the TV series, the soundtrack also features full length versions and new medleys from S.mouse, extended versions of Daniel and Nathan's various raps and Gran's Friday Night Song Night.

S.mouse recently performed to a full house at his only Australian Show at the Prince Bandroom, Melbourne. Crowd favourites included 'Black Balls' and 'Slap My Elbow' which debuted at #37 on the ARIA charts.

Chris Lilley received international acclaim for his portrayal of five nominees in the ABC comedy We Can Be Heroes: Finding the Australian of the Year. Creating and writing the series, Chris won the international Rose d'Or Award for Best Male Comedy Performance as well as Logie Awards for Most Outstanding New Talent and Best Comedy Series and the NSW Premier's Literary Award for Best Script Writing. The series also received nominations for four AFI awards, including Best Comedy Series, Best Screenplay for Television and Best Lead Male Actor.

Chris's series Summer Heights High was one of the highest-rated series of 2007 and became the biggest-selling TV series of all time in Australia. Chris was awarded AFI Awards for Best Comedy Series, Best Performance in a Television Comedy and the Byron Kennedy Award for Summer Heights High.

Chris began his career as a stand-up comedian and voiceover artist, graduated to television and gained a cult following for his characters Extreme Darren and Mr. G in the sketch comedy series Big Bite and Hamish and Andy on the Seven Network. Chris is also a musician and wrote much of the music for his three series. He released the single Naughty Girl, which became one of the highest-selling Top Ten singles of 2008.