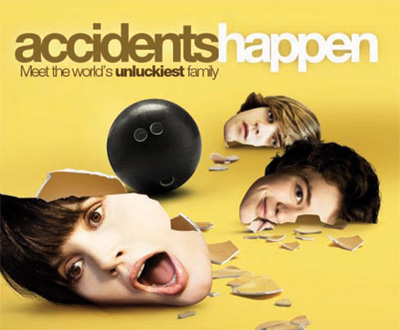 Synopsis: At the age of six, in suburban Connecticut, Billy Conway witnesses Mr Smolensky, his elderly neighbour, die in an accident involving beer, a barbeque and a large can of accelerant. Desperate to get away from the burning man, young Billy reacts by running straight into a flagpole and knocks himself out. His mother Gloria (Geena Davis), Queen of the Comic Putdown, suggests a trip to the drive-in movie to take Billy's mind off seeing Mr Smolensky barbequed, but tragically the night out ends up in a fatal car wreck, killing Billy's sister Linda and leaving his brother Gene in a vegetative state.

Over the ensuing eight years, the ripples of that fateful accident have thrown the family into disarray. While Billy (Harrison Gilbertson) has settled into an accident-prone existence, his father Ray (Joel Tobeck) has moved out. Gloria's caustic wit, once entertaining, has become an impenetrable armor; and Billy's only remaining sibling, Larry (Harry Cook), prefers to just remind everyone that life as a Conway is hell.

Circumstance throws Billy together with his brother's best friend Doug (Sebastian Gregory). Memories of Gene and Doug's childhood antics encourages Billy to cut loose with his new friend, in homage to his brother's unfettered spirit. And so begins a good boy's experimentation with delinquent behaviour. One night, after shoplifting in the nude, a mishap with a stolen bowling ball and a moving car results in another fatal accident.

Billy and Doug hide their involvement from everyone through funerals, weddings and police interrogations. When Gloria finally learns the truth, unaddressed guilt over the family breakdown erupts. The Conways learn that they can't hide from pain; that if this dysfunctional family has a purpose, they must find a way back to each other before they can move forward.

Director, Andrew Lancaster infuses a magical atmosphere into his debut feature with a vivid visual style and striking production design that coat the story with an ethereal quality. Academy Award® winner Geena Davis is brilliant as Billy's mother, delivering a performance full of nuance while at the same time vitalising the biting humour laced in screenwriter Brian Carbee's script. And bright newcomer Harrison Gilbertson portrays Billy perfectly as an adolescent caught in the collision of guilt, family responsibility, and self-discovery.

They are supported by a talented ensemble cast including Joel Tobeck, Harry Cook, Sebastian Gregory, Erik Thomson and Sarah Woods Lancaster is recipient of numerous awards for his shorts (In Search of Mike, Palace Cafe). Brian Carbee's screenplay is inspired by his mother's unique way of expressing herself and the world he experienced growing up in Connecticut.

"Where's your sense of >humour - with a face like yours, you'd think it would be standard equipment." - Gloria Conway