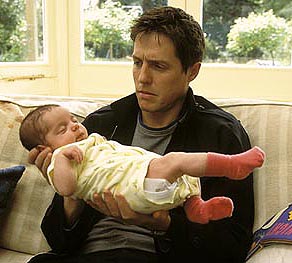 
Synopsis:
Based on Nick Hornby's best selling book, ABOUT A BOY is a comedy drama starring Hugh Grant as Will, a 38 year old rich, child-free, hip and irresponsible Londoner. Will spends his time hanging out in fashionable restaurants and dating women with no intention of committing to a permanent relationship.

After a fling with a single mother, he discovers that a good place to meet women is at single-parent help groups. Inventing a toddler son called Ned, he joins a local group and is well on his way to seducing Susie (Victoria Smurfit), when he meets 12 year old Marcus (Nicholas Hoult), the son of Susie's friend, Fiona (Toni Collette).

Gradually, Will and Marcus become friends and as Will teaches Marcus how to be a cool kid, Marcus helps Will to finally grow up, fall in love and possibly even commit to a real adult relationship with a lovely, single mother (Rachel Weisz).

ABOUT A BOY, like 'Bridget Jones's Diary', confirms that MEN TOO can sometimes be screwed up when it comes to love and that they are no less tortured, frightened or vulnerable than women. Throughout the film women will recognise not just the men they know but also themselves, as the common themes of isolation, fear of commitment, family and love are all explored in a magical mix of drama and humour.