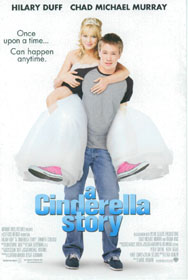 Once Upon A Time... Can Happen Any Time.

Synopsis:
Cinderella never had it this bad. In 'A Cinderella Story' - a twisted and hilarious update of the classic fairy tale - high school senior Sam Montgomery (Hilary Duff) lives at the beck and call of her self-obsessed step-mother Fiona (Jennifer Coolidge) and her sinfully wicked step-sisters, who treat her more like a servant than a member of the family.

With her sights set on attending Princeton University, Sam finds her less-than sparkling social life wonderfully complicated when she meets her prince charming online. But when her anonymous cyber soul mate turns out to be her high school's über-popular quarterback Austin Ames (Chad Michael Murray), Sam makes a dash back to reality, leaving her cell phone behind just before the clock strikes midnight.

Fearing rejection if her secret is revealed, Sam dodges Austin's efforts to discover the identity of his princess. Will Sam let fear hold her back, or will she find the courage to be herself and claim the life she's always wanted?

Her chance at "happily ever after" depends on it.

My Verdict:
There wouldn't be too many people who don't know the fairytale story of Cinderella. We would have listened to it being read to us and will read it to our own children; such is its universal longevity. 'A Cinderella Story' is a modernized formulaic version of the story with a few twists included to maintain interest.

Sam Montgomery tells us in voiceover at the beginning of the movie, what a wonderful life she has, just her and her Dad. Include some sickly sweet footage of her and her Dad here and you get the picture. This continues until her Dad marries Fiona, a selfish, egocentric woman who thinks only of herself and her two daughters, Brianna and Gabriella. Sam is relegated to the attic and after she is orphaned (which we never find out how, maybe due to the PG rating) she is called upon to attend to every whim of Fiona and her daughters, no matter how petty. Meanwhile she is still maintaining her A grade average at school and working at the diner which used to be belong to her father. How she manages all this is a little bit hard to fathom but then again this is a fairytale after all.

Sam meanwhile has a cyber pal that she relies on to share her thoughts and anxieties, although she has never met this person. Of course, this will be her saviour Prince Charming, but she just doesn't know it yet. Along comes the ball, where Sam accidentally leaves her mobile phone (instead of a glass slipper) behind before midnight, and the rest soon falls into place.

'A Cinderella Story' is very predictable but it has to be in order to remain essentially true to the original story and therefore that it no reason to dismiss it. It is quaintly entertaining and amusing with Jennifer Coolidge's performance as Fiona being the most outstanding as the over-botoxed, over-liposuctioned and over-everything. This is a junior chick flick that has the same morals as the classic Cinderella story, plus a few more to maintain the fairy floss theme throughout. Don't bother seeing it if you are after something meaty.