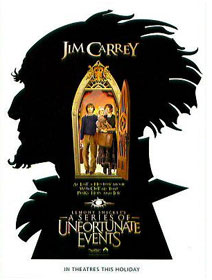 Synopsis:
You'll be extremely alarmed to learn that two-time Golden Globe winner Jim Carrey stars as Count Olaf, an outrageously diabolical actor and master of disguise who is determined to swindle the Baudelaire orphans out their family fortune in 'Lemony Snicket's A Series Of Unfortunate Events.' The film also stars two-time Academy Award® winner Meryl Streep as the children's overanxious Aunt Josephine and two-time Oscar® nominee Jude Law as the voice of Lemony Snicket. The result is a dreadful spectacle. A phrase that here means, "it will stir the imagination of the entire family as it shatters the mould of adventure stories and evokes the magic of truly classic entertainment."

My Verdict:
Jude Law is the voice of Lemony Snicket who oversees 'Lemony Snicket's A Series Of Unfortunate Events' as he is writing this story. We watch him but he is merely a shadow, which creates an air of mystery as to just who is Lemony Snicket. His reading is mysterious, cryptic and challenging including a teasing short animated opening of a cute little elf story that is intercepted by Lemony to tell us that if we want cute or if we want cuddly then we had better leave the cinema now. Staying for the remainder will reveal several unfortunate events, told episodically, about the Baudelaire siblings, Violet the inventor, Klaus the avid reader and Sunny who has a wicked bite, who are seeking a home after their parents are killed and their home is destroyed by fire.

Jim Carrey stars mainly as Count Olaf, the Baudelaire children's nemesis and hopeful heir to their fortune. Carrey also appears as a few other characters in the movie, which gives him ample opportunity to show off his talent for being able to cover a wide variety of characters, however sometimes it was too much and it became hard to even understand what he was saying, and that's coming from an adult so imagine how hard it must be for a child to follow. Meryl Streep is excellent as the phobic, anxious Aunt Josephine, with whom the children hope to find refuge away from Count Olaf. Timothy Spall and Billy Connolly, amongst others, also add dimension to the other diverse excellent cast. But for me, it was the Baudelaire children that were the stars of this film, especially Emily Browning as Violet. She has a certain quality of being able to draw you in to her character and was so very believable. Liam Aiken felt right as Klaus, supported by cute twins Kara and Shelby Hoffman as Sunny, who offered some of the funny lines via subtitles. Altogether, the three children really did have a special empathy.

'Lemony Snicket's A Series Of Unfortunate Events' has some scary moments, which may be too much for very young children and the film did feel like it was stretched time wise. There was also a rather vague conclusion to the importance of spyglasses which were referred to throughout and given as a significant clue when referring to the Baudelaire family lineage.

'Lemony Snicket's A Series Of Unfortunate Events' is a hard movie to describe. It covers a variety of genres, not settling on one in particular, it is perhaps aimed at a variety of age groups, not one in particular and it defies comparison with any other movie, as it is so unique. It is however, a an entertaining piece that will keep you guessing right to the end and keep you intrigued as you try to decipher just what is happening amongst this jigsaw.