Sarah Silverman A Million Ways to Die in the West DVD 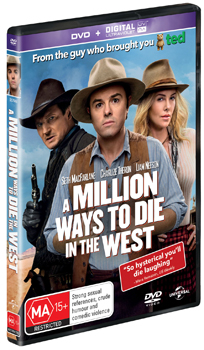 A Million Ways to Die in the West DVD

In Arizona 1882, nothing comes easy in the bitterly unforgiving Old West, except dying. Whether it's death by splinter, crushing by an ice block or an exploding camera at the country fair, the west is a violent, dangerous and disease-ridden place. We follow the story of protagonist Albert (MacFarlane), a simple sheep farmer, and soft man who has fallen on hard times. Adding to Albert's distress and feelings of inadequacy, his beloved girlfriend (Seyfried) leaves him for the town's moustache groomer (Patrick-Harris).

Things begin to look up, when a mysterious and beautiful woman (Theron) rides into town and helps him find his courage. However, when her husband (Neeson), a notorious outlaw, arrives seeking revenge, the farmer must put his newfound valour to the test.

From high-noon duels and bar-room brawls to country fairs and square dancing, A Million Ways to Die in the West takes comedy to another level. Hysterically raucous and uproariously out-there, there is no shortage of humour, crude dialogue, bizarre violence and outrageous sexual references.

Blu-ray Special Features:
Deleted Scenes
Gag Reel
One Upon a Time, in a Different West
A Fistful of Dirt…in Your Mouth
The Good, the Bad, and an Increasingly Decreasing Population
Feature Commentary

Question: How did you get involved in A Million Ways To Die In The West?

Sarah Silverman: Seth MacFarlane told me about the project and that he had written this part for me, which was so flattering. It is one of the most perfect comedy scripts I have ever read, so I wanted to be a part of it.


Question: What appealed to you about this project?

Sarah Silverman: I was so excited at the chance to do anything with Seth MacFarlane and the cast that has been assembled. I just can't believe I got to do all of these scenes with an actor like Giovanni Ribisi!


Question: What can you say about Giovanni Ribisi?

Sarah Silverman: Giovanni is a 'real deal" kind of actor. At the same time, he is so lovely, silly and kind. He is also quite goofy. I fell in love with him from the table read. He is so adorable, interesting and interested in things. It was very easy to play someone who adored him.


Question: In your eyes, who is Ruth, the character that you play in the film?

Sarah Silverman: Ruth is just a sincere, earnest, vulnerable person who walks around with a heart on her sleeve. She has a great boyfriend who is the same way. I think she just thinks of being a prostitute as a job where she can make money to afford a new belt for her boyfriend Edward to wear to church!


Question: How would you describe this bizarre couple that Ruth and Edward form?

Sarah Silverman: I thought of Ruth and Edward like two Woody Boyd's from the television show 'Cheers" because they are so pure. Giovanni is truly that way. I think they make a great couple.


Question: You also have some hilarious moments with Alex Borstein who plays Millie, the Madame of the saloon were Ruth works.

Sarah Silverman: Alex is so brilliant! She doesn't make a lot of appearances in the movie, but she gets applauses when she does. She is great.


Question: You were surrounded by a great cast. What was it like to work with them?

Sarah Silverman: Most of the actors were dramatic actors, but they were also genuinely funny people. Charlize Theron, for example, is this regular girl who also has such a great sense of humor and is just game for anything. Seth's energy with him at the helm just trickled down to the rest of the cast. You know that it's going well when everyone is so invested in making the movie great.


Question: What can you say about Liam Neeson?

Sarah Silverman: I did not have any scenes with Liam, but we did a photo shoot together where he walked up to me, scooped me up and slow-danced with me to this song. I thought my knees were going to give out on me. It was so cool! Liam is just this big, strong, gorgeous and foreign man. He is hilarious, too!


Question: Keeping a straight face on a set like this must have been a challenge.

Sarah Silverman: Yes, it was a challenge keeping a straight face while making this movie. We all laughed so hard and had so much fun, but as a comedian, I am used to not breaking up too much.


Question: Seth MacFarlane wore many different hats on the film as producer, writer, director and actor. What was he like on set?

Sarah Silverman: Seth was a delight on set, and it was just amazing how calm he was considering all of the things he was doing. He literally always had a smile on his face. Despite having an immense amount of pressure from all sides, he seemed cool as a cucumber and as if he was genuinely having fun. This is what he loves!

Sarah Silverman: I'm sure Seth felt there was a lot at stake with acting in front of the camera, but he seemed very calm to me. I just thought his character was hilarious and, at the same time, really lovely and honest. I remember telling him that lots of girls were going to fall in love with him after seeing the movie.


Question: How would you describe Seth's style of comedy?

Sarah Silverman: Seth's comedy is brilliant! His comedy is really smart, but also not above showing something like a hat full of diarrhea. I like that his comedy is not snobbish and is as bizarre and funny as it is heady. It makes you take a beat and go, 'Oh, that's true!" As specific, R-rated and envelope-pushing as this film is, it is also extremely accessible. There is visual comedy in A Million Ways To Die In The West and the characters are all fully realised.

Sarah Silverman: Yes, the film is beautiful. I think the film will do very well internationally precisely because it is also so visual.


Question: On top of all of the comedy, the film feels very real.

Sarah Silverman: Yes, it was crucial and brilliant to make A Million Ways To Die In The West so authentic. The kind of anachronism of Seth's character being able to observe the life around him was made acceptable because everything was so authentically done. It's a movie people are going to want to see several times because it is so rich and has so many layers. I think people will completely miss certain things in the movie because they are probably laughing at the joke before it. That's quintessential Seth MacFarlane!


Question: What did you think of A Million Ways To Die In The West when you watched it completed for the first time?

Sarah Silverman: I loved it! This film was a blast to watch. There were so many things that really surprised me in a good way, such as the visual pieces and jokes that were added to the script.


Question: What memories have you taken back from your stay in New Mexico during the shoot?

Sarah Silverman: Great quesadillas, the best guacamole I've ever had and just nice lovely people are what I have gained. Pretty crazy weather was also something we experienced. It would be 100 degrees one minute, and then two hours later we would have a dust storm with ice in it.


Question: Movies that are fun to watch are not always fun to make. How was this one?

Sarah Silverman: It is true that some movies that are fun to watch are not fun to make at all, but this one was a blast. Because we spent a long time away from home, I got to spend a lot of time with Amanda Seyfried, for instance. She is so funny!


Question: What can you say about Neil Patrick Harris, who plays the boyfriend to Amanda Seyfried's character after she dumps Seth MacFarlane's character at the beginning of the story?

Sarah Silverman: I already knew Neil before this film, and I just adore him. He is so amazing in this movie. His range is bizarre. I always tease him saying that he must take the Limitless pill.


Question: You have played a wide range of characters in your career as well.

Sarah Silverman: I love to do different things, but I need naps. Neil gets off work and is a great dad to his kids. I don't know how he does it!


Question: Do you think it's important to not take ourselves too seriously?

Sarah Silverman: Yes, I do think it's important not to take ourselves too seriously. Whenever I start taking myself too seriously, I immediately take a step back and think, 'Wait, we are just hurling through space right now. Nothing is that big of a deal!"