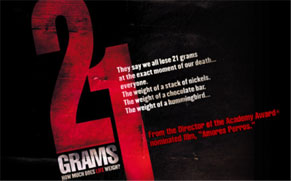 How Much Does A Life Weigh?

Synopsis:
Life has a way of coming up with resonant metaphors, incredible ironies, and surprising coincidences.

Chained to death's door, Paul receives the gift of life, only to surrender it so that another can go on. A devastating event in the present forces Cristina to return to her past and reject her future. Trapped by his spiritual mission, Jack carries such great guilt that hope and redemption seem beyond possibility.

At the crossroads of life and death, all three collide in a whirlwind of revenge and forgiveness.

21 Grams is the weight we lose when we die, the weight carried by those who survive. 21 Grams: the gravity of life.


My Verdict:
21 Grams is told in a series of short episodes that at first dont appear to be linked together, therefore a certain level of concentration is needed. Dont go visiting the candy bar or toilets during the movie as it is not sequential and so many pivotal moments appear at random. As the movie progresses, the story becomes clearer and you appreciate the method used, even if initially confused.

The three leads are simply superb. Sean Penn, in a role reminiscent of his role in the recent Clint Eastwood movie Mystic River, plays Paul Rivers, a man on the heart transplant waiting list. He is in a marriage that is damaged, and struggles with his mortality. After he receives his new heart, he cant help the burning desire to find the donor and his family. His search is successful but at a price. Naomi Watts is Cristina Peck, a middle-class wife and mother of two young daughters. Her world is turned upside down after a tragic accident, which sees her slide into a world of drugs and alcohol. It is this scenario where Naomi really shines. Benicio Del Toro is the ex-con Jack, who found God whilst in prison. He really wants to go straight, holding together his family, but the accident is where he falls off the rails. He is wracked by emotion as he struggles to come to terms with the accident, his part in it and his faith. Benicio is just so right for the role.

21 Grams was shot almost entirely by hand-held camera, which gives it a more personal touch. Many of the extra characters were not professional actors, but real people in their real jobs. For example, at the hospital, the nurses and doctors were in fact, real nurses and doctors at the hospital. All this to achieve the believable which works really well. Knowing this also makes the story more believable. Sometimes in a movie, knowing that the extras are just extras, takes away a certain truth to the story. 21 Grams has the advantage here.

21 Grams is a very emotionally draining moving. It is heart-wrenching and heart-breaking. The pain and anguish felt by the three lead is so real, such are the performances by the three lead actors. It is hard to imagine anyone else in their roles.
It will be one of the stand-out movies for the year, even this early in the year as it is not that often that a movie of this calibre is made. Go see it.