According to Booking.com research polling 10,000 respondents across 10 markets, we are all striving to get more diversity in our travel. Two thirds (66%) of global travellers said they wanted to add a completely new travel experience next year to what they'd done last year.*

Given our adventurous appetite, why not start by building a better bucket list? One that's a notch or two higher on the intrepid scale with destinations that have just as much wow factor as, say, the Inca trail, but far fewer tourists.

To help you tap into your adventurous side, Booking.com used traveller recommendation data to compile this list of places you may never have heard of or are pretty far off the beaten track, that you need to visit. All of these destinations have been highly approved by Booking.com customers, 95% of whom recommended them to other travellers.

Here's a list for culture vultures, laying out the best but lesser-known gems for those seeking a taste of the arts.

The town of Recanati is home to a surprisingly vast collection of Renaissance art, given its relatively humble bucket-list status. It's also been called the -city of poetry', on account of it being the birthplace of seminal 19th-century poet Giacomo Leopardi. The Recanati Museum and Municipal Gallery houses a rich collection of paintings by Lorenzo Lotto. Other must-sees include Renanati Cathedral and the Diocesan Museum of Sacred Art.

The sight of the fort of Jaisalmer rising from the sand in the middle of the Rajasthan desert is one of baffling, otherworldly beauty. Sadly, it's often sacrificed on India itineraries in favour of the better-known Taj Mahal in Agra. But if you're turned on by culture, Jaisalmer offers a great deal more. Known as the Golden City, its ancient streets and honey-coloured sandstone buildings have an incredible history and are a delight to wander around. Explore the magnificent havelis (mansions and palaces) in the Old City and learn about Jaisalmer's religious and military history.

Viljandi is a peaceful, historical enclave of Estonia that boasts enchanting, crumbling ruins in a leafy green lakeside setting. It's often called the cultural capital of Estonia on account of its Culture Academy and visitors will find lots to do here, including open-air theatre and a big annual folk music festival. 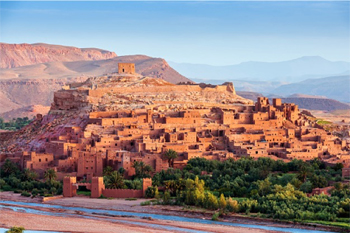 Sitting along the old trading route between the Sahara and Marrakech, the ancient fortified settlement of Ait Benhaddou has served as the setting for films such as Gladiator and Babel. With the dramatic appearance of being carved into the desert, the earthen clay architecture glows orange in the African sun. And with only four families still living in the ancient city, treading its dusty, sun-baked streets feels like exploring an open-air museum.

Borobudur is the largest Buddhist monument in the world, as well as being 300 years older than the more well-known Angkor Wat in Cambodia. In a region of rice paddies and jungle, this magnificent structure is a three-dimensional mandala (diagram of the universe) that was rediscovered in 1814 and has since become a destination of Buddhist pilgrimage. The intricate carvings covering the blocks of lava rock and hundreds of Buddha statues are endlessly enigmatic and particularly beautiful when seen rising out of the morning mountain mist.

Looming mightily out of the Australian Outback, Uluru is sacred to the Anangu, the Aboriginal people of the area. And standing in its shadow with flat, arid desert all around, it's easy to understand why. Though tourists are asked not to climb the rock out of respect for its Aboriginal landowners, watching the colour of the rock change from orange to red as the sun sets is breath-taking enough.

Visit Barichara for beguiling Spanish colonial architecture, history and its mellow mood. It's a small town and one of Columbia's most scenic. Hilly, cobbled streets are lined with trees and flowers, while buildings feature clay-tiled roofs and whitewashed walls. Don't miss the Cathedral of the Immaculate Conception, in all its ochre splendor blending into the warm-coloured landscape.

Anyone who appreciates culture will be in for a treat visiting the dainty hilltop town of Vézelay in Burgundy. As well as fine wine, medieval Vézelay boasts the glorious Romanesque basilica of St Mary Madeleine amongst its 15th-, 16th- and 17th-century houses.The town has been inhabited since ancient times and is historically significant as the meeting place between Richard Lionheart and King Philippe of France before they set off on the 3rd Crusade. Pop into a gallery, enjoy a concert in the basilica or wander the charming alleyways and courtyards before stopping off at a typical French café.

A tiny island village on Lake Petén Itzá, Flores is mostly used as a Launchpad for visiting the nearby Mayan ruins at Tikal. Once you've had your dose of ancient Mayan culture, Flores is also a great destination in its own right. The sight of its colourful cubist houses reflected on the water is a delight, as are the views of the area from its rickety buildings.