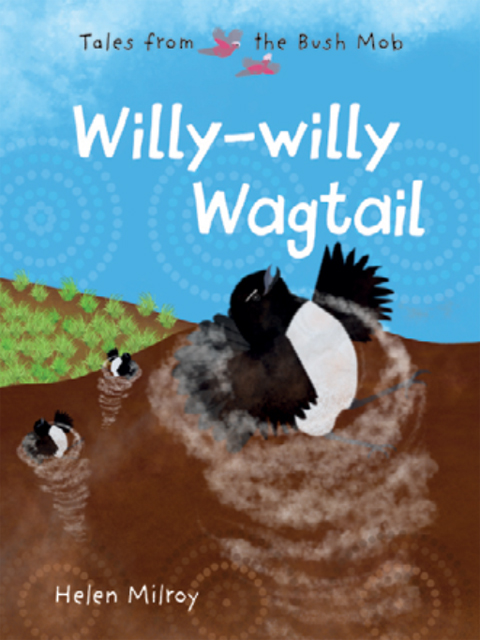 Tales from the Bush Mob

'Tales from the Bush Mob' is a series of books about the Bush Mob, a group of animals that works together to solve problems. A rich landscape of characters and places populate this series and include Platypus, Koala, Emu, Wombat, Kookaburra, Echidna, Kangaroo and Gusto, the wind. Places include Willy Wagtail's Tree, Dingo's Den, Old Billabong, Bird Meeting Place, Cockatoo's Nesting Trees, Top Camp and Emu Race Track.

Willy-willy Wagtail is the frst book in the series and goes back to before Bush Mob get together and at a time when nobody understands each other, and there are lots of fghts. One day there is a terrible bushfre and Willy Wagtail, Gusto (the wind) and Crow get all the Bush Mob to work together to save the community. For the frst time, everyone understands each other and Dingo takes charge and leads all the animals to safety. Dingo is now Boss Dog and is head of the Bush Council, together with Willy Wagtail and Crow – the Bush Mob is formed. The next two titles are The Emu Who Ran through the Sky and The Sweetest Egg of All (both to be released in 2021).

Helen Milroyis a born storyteller and a talented artist. She is a descendant of the Palyku people of the Pilbara region of Western Australia but was born and educated in Perth. She studied Medicine at the University of Western Australia, worked as a General Practitioner and Consultant in Childhood Sexual Abuse at Princess Margaret Hospital for children for several years before completing specialist training in Child and Adolescent psychiatry.