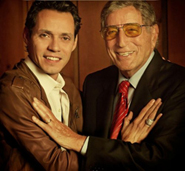 TO BE RELEASED ON OCTOBER 26TH

Tony Bennett is known for recording duets live and VIVA DUETS was no exception, with sessions recorded in Ft. Lauderdale, New York, and in the case of famed Mexican performer Vicente Fernandez, on his 400 acre ranch in Guadalajara. All of the tracks are from Bennett's extensive hit catalog, with the exception of the duet with Vicente Fernandez, which features an English/Spanish version of the song, Return To Me, originally recorded by Dean Martin. VIVA DUETS presents Bennett's classic songs with an international flavor that will generate widespread appeal forthis unique multi-lingual presentation. Working with this unprecedented list of Latin artist, many of whom he met for the first time in the recording studio, Bennett commented, "Each of these artists were so warm and welcoming that there was an instant rapport. Latin music has always been about melody and harmony and a lot of soul, so there was a very close artistic connection with each duet guest. I am absolutely thrilled about the record."

Tony's first two duet projects, DUETS and DUETS II, both achieved platinum & double platinum sales respectively here in Australia, multiple GRAMMY awards and were the best selling albums in his career to date. Bennett made music industry history when DUETS II entered Billboard's Top 200 at the #1 position, making him the oldest artist, at the age of 85, to have a CD in the top spot. The DUETS project also had international acclaim, hitting the top of the charts in several countries including Portugal and Mexico.

The current track listing for TONY BENNETT: VIVA DUETS is as follows:
"For Once In My Life" with Marc Anthony
"Don't Get Around Much Anymore" with Miguel Bose
"The Very Thought of You" with Ana Carolina
"The Best Is Yet to Come" with Chayanne
"The Good Life" with Franco DeVita
"Who Can I Turn To?" with Gloria Estefan
"Return to Me (Regresa A Mi)" with Vicente Fernandez
"Blue Velvet" with Maria Gadu
"Just in Time" with Juan Luis Guerra
"Are You Havin' Any Fun?" with Dani Martin
"The Way You Look Tonight" with Thalia
"Cold, Cold Heart" with Vicentico
(Song selections for Roberto Carlos and Romeo Santos TBD)


ABOUT TONY BENNETT:
Just days before the eruption of Mount Vesuvius in Italy, the great-grandparents of the singer Tony Bennett took a major leap of faith and embarked on steamship, along with hundreds of other Italian immigrants of limited means, seeking a better life in America. Little did they knowthat their great-grandson would make the American Dream come to life as an Italian-American born in New York City during The Great Depression, to become one of the most legendary singers of popular song in the world…..TONY BENNETT.

No one in popular American music has recorded for so long and atsuch a high level of excellence than Tony Bennett. The essence of hislongevity and high artistic achievement was imbued in him in his loving childhood home in the Astoria section of Queens where he was born onAugust 3, 1926 under his given name, Anthony Domenick Benedetto. His father died when Tony was 10 and his mother, Anna, raised Tony and his older brother and sister, John and Mary, in a home surrounded by loving relatives who were Tony's first fans filling him with encouragement and optimism. Each Sunday, his family would gather in a circle while Tony and his siblings performed for them. "Although these were very tough times for everyone, our family connection was so strong and positive that Ifelt very lucky and it was during those Sundays of my childhood that I knewbeing a performer was what I was meant to do with my life." He attended the High School of Industrial Arts in Manhattan, where he continued nurturing his two passions, singing and painting, but at the age of 16 he had to leave school to find a job to assist his widowed mother, who worked as aseamstress, with meeting their expenses. As Tony recalls, "It was a regret that I was not able to finish my formal education, so ever since then, every day, I am still studying and learning things, and I am always readingbooks. Even today as I approach 86 years of age, I am still learning more and more -- I am what I call a perpetual student. My education really was the "school of life."

As a teenager Tony sang while waiting on tables and then enlisted in the Army during World War II and while in Europe he performed with military bands. He later had vocal studies at the American Theatre Wing School. The first time Bennett sang in a nightclub was in 1946 when he sat in with trombonist Tyree Glenn at the Shangri-La in Astoria. Bennett's big break came in 1949 when comedian Bob Hope noticed him working with Pearl Bailey in Greenwich Village in New YorkCity. As Bennett recalls, "Bob Hope came down to check out my act. He liked my singing so much that after the show he came back to see me in my dressing room and said, 'Come on kid, you're going to come to the Paramount and sing with me.' But first he told me he didn't care for my stage name (Joe Bari) and asked me what my real name was. I told him, 'My name isAnthony Dominick Benedetto' and he said, 'We'll call you Tony Bennett.' And that's how it happened. A new Americanized name -- the start of a wonderful career and a glorious adventure that has continued for over 60 years."

With millions of records sold world-wide and platinum and gold albums to his credit, Bennett has received seventeen Grammy Awards -- including a 1995 Grammy for Record of the Year for his "MTV Unplugged" CD which introduced this American master to a whole new generation -- and the GrammyLifetime Award. His 2007 prime-time special, "Tony Bennett: An American Classic," won seven Emmy Awards. His initial successes came via a string of Columbia singles in the early 1950's, including such chart-toppers as "Because of You," "Rags to Riches," and a remake of Hank Williams "Cold, Cold Heart." He had 24 songs in the Top 40, including "I Wanna Be Around," "The Good Life," "Who Can I Turn To (When Nobody Needs Me)" and his signature song," I Left My Heart In San Francisco," recorded 50 years ago this coming January 2012. This song garnered him two Grammy Awards. Tony Bennett is one of a handful of artists to have new albums charting in the 50's, 60's, 70's, 80's, 90's, and now in the first two decades of the 21st century. He has introduced a multitude of songs into the Great American Songbook that have since become standards for pop music. He has toured the world to sold out audiences with rave reviews whenever he performs.

Tony Bennett is a dedicated painter whose interest in art began as a child. He continues to paint every day, even as he tours internationally. He has exhibited his work in galleries around the world. The United Nations has commissioned him for two paintings, including one for their 50th anniversary. His original painting, "Homage to Hockney," is on permanent display at the Butler Institute of American Art and the landmark National Arts Club in New York is home to Tony's painting "Boy on Sailboat, Sydney Bay." Three of his paintings are part of the Smithsonian Museums permanent collections including his portrait of hisfriend Duke Ellington that became part of the National Portrait Gallery's collection in 2009.

Throughout his career, Tony Bennett has always put his heart and time into humanitarian concerns. He has raised millions of dollars for the Juvenile Diabetes Foundation, which established a research fund in his name. His original paintings each year grace the cover of the American Cancer Society's annual holiday greeting card, proceeds from which are earmarked for cancer research. He is active in environmental concerns and social justice. He marched with Dr. King in the historical Selma to Montgomery Civil Rights movement and the Martin Luther King Center in Atlanta bestowed upon him their "Salute to Greatness Award" for his efforts in fighting racial discrimination. Bennett founded the Frank Sinatra School of the Arts in 2001 and in 2009 a state-of-the-artpermanent facility was built in his hometown of Astoria, Queens. With his wife, Susan Benedetto, he established Exploring the Arts, a non-profit organization that supports arts education in NYC public schools. By the fall of 2011, Exploring the Arts will be partnering with 14 public highschools in every borough of New York City to enhance and foster the arts.