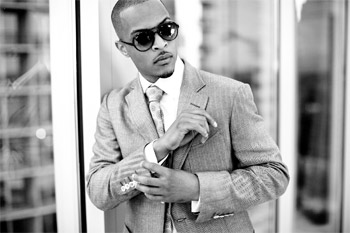 T.I. gathered only the best and the brightest for his triumphant solo return.  Paperwork was  Executive Produced by Pharrell, and features multiple star-studded collaborations and guest appearances on the album, including Chris Brown featured on -Private Show', Usher featured on -At Ya' Own Risk', and The-Dream featured on -Let Your Heart Go (Break My Soul)', among others.

Fans can pre-order the highly anticipated new album on iTunes: http://smarturl.it/paperworkdlx. All those who pre-order Paperwork will receive the album's kickoff hits -No Mediocre' (featuring Iggy Azalea) – a Top Ten smash on The American Mainstream R&B/Hip Hop charts - and -About The Money', (featuring Young Thug) which has also been a mainstay of urban and hip hop charts for nearly two months.  The album track -New National Anthem' featuring Skylar Grey is also available to download for pre-ordering fans.

One of the most buzzed about albums of the fall, T.I. described his first Columbia and Sony Music Entertainment Australia release as 'of a stellar nature", and a golden opportunity to apply all of his diverse strengths to his music.   Globally recognized as a visionary artist and groundbreaking multi-platform entrepreneur, his stewardship of innovative label Grand Hustle, and multiple TV, digital and branding endeavors has made him a catalyst for some of the industry's most exciting creative partnerships.

Throughout his career, the multi-platinum Atlanta-native has set the standard by which all other hip hop icons are measured, achieving four Billboard Hot 100 #1's, and selling more than 14 million albums and 30 million singles. One of the most honored artists working today, T.I. has been awarded 11 Billboard Awards, 9 BET Hip Hop Awards, 3 GRAMMY® Awards, 3 BET Awards, 2 American Music Awards and an MTV Video Music Award. His standout collaborations with some of music's biggest artists include Jay-Z, Justin Timberlake, Robin Thicke, Lil Wayne, Lady Gaga, Rihanna, Destiny's Child, Britney Spears, B.O.B., Drake, Christina Aguilera, Kanye West and Swizz Beatz. His label imprint Grand Hustle, founded in 2003, enters its second decade of operations as a platinum-plus foundry for some of the most innovative hip hop talent in the world.

T.I.'s success in the visual realm has carried over to movies and television, with the versatile star experiencing remarkable success as an actor, appearing in the hit film Identity Thief and playing a guest starring role in the SHOWTIME series HOUSE OF LIES.  He is also slated to appear in the upcoming Kevin Hart and Will Ferrell comedy GET HARD due out early next year and has been cast in the MARVEL film ANTMAN with co-star Paul Rudd. His VH1 unscripted series, T.I. & Tiny: The Family Hustle is already in its third season, capturing T.I. as he balances a thriving career, wife Tameka 'Tiny" Cottle and their loving, blended family of six children.  The series continues to be one of the highest rated shows on VH1.

3.  About The Money ft. Young Thug