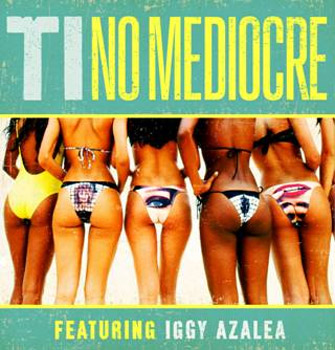 The entire entertainment world is preparing for a multi-platform tsunami surrounding the much anticipated single, the official debut effort from T.I's forthcoming album, Paperwork, due out 2014.  The song's worldwide radio premiere kicked off on Clear Channel's Urban and Rhythm stations, Monday, June 16th, at 9:00 AM E.S.T., and will be heard every hour from 9:00 AM E.S.T. to 6:00 PM. The track is available at iTunes now: and can be streamed here.

The music video for 'No Mediocre," which was directed by Director X, who has worked with Drake, Ciara, Justin Bieber, and Rick Ross, among others, and helmed Iggy Azalea's hit video, 'Fancy." was filmed on location in Rio de Janeiro, Brazil. The global video unveiling for the 'No Mediocre" music video will premiere on MTV.com/Vh1.com on June 18th at 2:01 PM, A.E.S.T. here.

The single comes on the heels of much buzz for T.I.'s street-release of 'About The Money," available on iTunes http://smarturl.it/ATMSingle and features Young Thug.  But make no mistake – 'No Mediocre" is T.I.'s definitive inaugural statement from his upcoming ninth studio album, with the rapper commenting recently in an interview on Fuse that the song is a clear denouncement of -mediocrity altogether!'

Would the revered hip hop/entrepreneurial king of the south have it any other way? Currently putting the finishing touches on his Grand Hustle/Columbia Records debut album, executive produced by Pharrell, and produced by Timbaland and longtime collaborator DJ Toomp, the anticipation has been building since 2012 for T.I. to return to album-making turf and deliver his knockout blow.  Throughout his career, the multi-platinum Atlanta-native has set the standard by which all other hip hop icons are measured, achieving four Billboard Hot 100 #1's, and selling more than 14 million albums and 30 million singles. One of the most honored artists working today, T.I. has been awarded 11 Billboard Awards, 9 BET Hip Hop Awards, 3 GRAMMY® Awards, 3 BET Awards, 2 American Music Awards and an MTV Video Music Award. His standout collaborations with some of music's biggest artists include Jay-Z, Justin Timberlake, Robin Thicke, Lil Wayne, Lady Gaga, Rihanna, Destiny's Child, Britney Spears, B.O.B., Drake, Christina Aguilera, Kanye West and Swizz Beats.

T.I. has also experienced remarkable success as an actor, appearing in the hit film Identity Thief and playing a guest starring role in the Showtime series House Of Lies and will appear in the upcoming Kevin Hart and Will Ferrell comedy Get Hard due out later this year. His VH1 unscripted series, T.I. & Tiny: The Family Hustle is already in its third season, capturing T.I. as he balances a thriving career, wife Tameka 'Tiny" Cottle and their loving, blended family of six children.  The series continues to be one of the highest rated shows on VH1.