The Detrimental Effects of Emotional Abuse 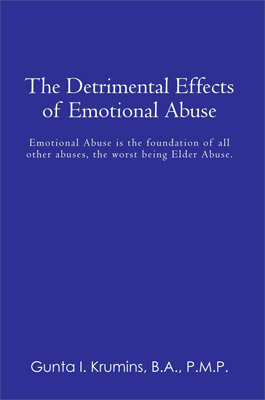 The Detrimental Effects of Emotional Abuse

One in every four women will be a victim of domestic violence in her lifetime, reports the National Coalition Against Domestic Violence (NCADV).

The NCADV also states that domestic violence is one of the most chronically underreported crimes, with only approx. one-quarter of all physical assaults, one-fifth of all rapes and one-half of all stalkings perpetuated against victims by intimate partners being reported to the police.

And how many more people hesitate to report psychological or emotional abuse?

Gunta Krumins, BA, PMP speaks out against the silent epidemic in her new book, The Detrimental Effects of Emotional Abuse.

The Detrimental Effects of Emotional Abuse is the first comprehensive, non-clinical and educational guide exposing emotional abuse as the foundation of all types of abuse. Explaining how to detect, expose and fight emotional abuse, the book ultimately creates a blueprint for stopping the cycle in our homes and communities.

Krumins is intimately acquainted with the damaging costs of a manipulative relationship. After years of reflection and a long-term behavioral study, she presents this guide so readers can see beyond the veil of disguise and recognise the different levels and situations of emotional abuse - and, finally, stop it from occurring.

"Individuals who prey upon the vulnerability of others do so in such a skilled way they are insusceptible to both suspicion and proof," says Krumins. "Emotional abuse is the silent monster in our midst, occurring in neighbors' and loved ones' homes more than we realise."

By recognising the traits of abusers and trademarks of an emotional abuse situation, victims of abuse in an intimate relationship can be more easily recognised, Krumins acknowledges. The Detrimental Effects of Emotional Abuse tears away the screen, opening the eyes of society to these tense living situations and giving revelation to victims living in fear.

Krumins' goal is to raise awareness that emotional abuse ascends simple yelling or verbal bullying and often culminates into elder abuse, another hidden issue that only recently made headlines in Canada with the introduction of an elder abuse bill.

"Emotional abuse is a tragic situation that's a daily reality for millions," Krumins says. "A widespread illegal activity is being ignored when people are victimised in their own homes - elderly or otherwise. What they are doing to their victims is criminal and has to be stopped."

Gunta Krumins, B.A., P.M.P., is a credentialed high-level project manager with experience mainly in the nonprofit sector. Drawing upon her past experiences in an emotionally abusive relationship, Krumins wrote The Detrimental Effects of Emotional Abuse in order to end domestic violence and elder abuse. She resides in Canada.

Question: Why was it important to you, to write The Detrimental Effects of Emotional Abuse?

Gunta Krumins: I based my book on a long term study of Emotional Abuse, where I was abused for over 4 years by community members where I worked as a volunteer. When I realized what I had actually experienced could even help manage and even solve the issue of Elder Abuse, I was urged to write about it. In the end, it took me 5 years to complete and publish the book which re-defines Emotional Abuse as the foundation, rather than just a symptom, of other forms of abuse, such as Elder Abuse. Why I did it was because I don't want perpetrators of Emotional Abuse, spousal abuse or Elder Abuse or other abuses that can be linked to Emotional Abuse to get away with their crimes any longer. I want to stop the cycle of abuse and I can with the breakthrough information I have. It's a guide that can be used by victims of abuse and their families, by the general public who want to understand what EA is and by any and all professionals dealing with Emotional Abuse and Elder Abuse.


Question: Why do you believe domestic violence is one of the most chronically underreported crimes?

Gunta Krumins: I believe it to be so chronically underreported because basically no one to date was able to see how Emotional Abuse factors into the issue of domestic violence.

Basically, not many of us are able to recognize it for what it is. Emotional Abuse actually ascends simple verbal bullying and often culminates into the ultimate offense, EEA (Emotional Elder Abuse). The perpetrators are actually people we trust and don't suspect and the manner in which they manage to learn to handle us and end up controlling us to their benefit is being misread, overlooked or tolerated. The way perpetrators behave is merely seen as being rude, bad tempered or mean but if you look further at the whole situation, you'll realize that they chose to act this way and how they do it is done with purpose and with ill intent. We may merely sense that we want to keep the peace so we try to please or appease the other, but in reality, they are fully aware of what they're doing and enjoy what they're doing to you to get what they want from you. They are not people who factor in your feelings at all and that's where it becomes malicious and a crime of intent against another. How they go about doing what they do also determines the level and stage of Emotional Abuse we can find ourselves in. In the extreme situation, such as EEA, the perpetrators actually lure an elder and trap them into a situation where they get isolated from everyone and are without help. What they do to the elder, using the same strategy and control tactics on a victim as they would in any other situation, is meant to apply extreme amount of undue influence and disguised pressure 24/7 on the elder to gain complete control over them and defraud them in the end without their being either aware of what is happening to them or their being unable to do much to stop them when they do finally see what is happening to them.


Question: What are some of the main signs of a manipulative relationship?

Gunta Krumins: Helping victims and families of the emotionally abused will depend on things other than blatant, obvious signs of abuse. It'll be more about what my book focuses on:
1.understanding the general nature and traits of an unhealthy relationship, especially the beginning stages of one, that can lead to an abusive relationship;
2.understanding how perpetrators of EA and EEA lure their victims into abusive relationships.

In healthy relationships, generally both parties will take their time and pace around each other for quite a while before they start pulling out all stops and handing over their trust to the other person. In an abusive relationship, the perpetrator of EA or EEA is targeting the "trust factor" in the relationship. What they want to do is, by playing with the vulnerable spots in a person, they want to hurry up this phase in a relationship, and when they get the trust, that's when they know they have control of their victim.

Asking yourself the question "Why?" means being very honest with yourself. You're actually stepping back from the relationship to look at it very objectively, without emotion. When we're lonely, or something is missing from our lives or we're simply looking for a relationship to fulfill our lives, this question is very hard to answer honestly. When you step back a little, you might not like what you see when you ask yourself "What is it that they want from me?" However, to ignore the question means you may be putting yourself at risk.

Also, in healthy relationships, both parties will be careful not to get hurt. For that reason they move towards each other in the relationship with great caution. In an abusive relationship, one party will be moving faster than the other. They won't be concerned about getting hurt because they don't plan on getting hurt. Nor do they plan on being vested in the relationship. They just want to get something out of it. And in order to get what they want, they know they're going to do what it takes to get it.

What about the family? WHAT DOES THE FAMILY FEEL OR GO THROUGH when Emotional Abuse is involved?

First and foremost, for the family, there will be a gradual build up of confusion, conflict and doubt where there wasn't any before. No one will know why it's happening and what to do about it. There will also be a gradual build-up of resentment, bitterness, unhappiness, loneliness, hurt, pain, distrust and anger that has been brewing amongst all the members of the family. Slowly, over time, everyone will find themselves yelling at each other or no one will be talking to each other.

Using a certain strategy and various tactics i.e. lying, gossip, accusations, etc., the perpetrator is creating tension between everyone in order to break everyone up. This causes three things to happen: it isolates the victim from any help from family and friends, it separates family and friends from each other so they can't figure out what is really going on and control is being maintained by the perpetrator by keeping all parties separate and dependent entirely on the perpetrator.


Question: If someone is a victim of emotional abuse, what is the first thing they need to do?

Gunta Krumins: When you're dealing with an EA victim, the victim's trust has been tampered with and their emotional well-being has been assaulted in many different ways. They can't see past the pain, guilt and shame that have been inflicted upon them. They are in pieces feeling emotionally off-balance, confused, and embarrassed. They probably won't be able to grasp any logic you try to ingest or help you offer because they can't think for themselves and they can't stand up for themselves. You're going to need a great deal of patience if you really want to help them.

To initiate the healing process, the victim has to understand certain things that will help them greatly. Although it's highly unlikely they will believe you at first, but nevertheless, in order to learn how to handle themselves against any further abuse, you must help "empower" them with these messages:
1) they are not responsible for their situation
2) this is not their fault
3) their perpetrator is not going to change and they do mean to harm them
- even if it is their son or daughter


Question: How can we aid in raising awareness for emotional abuse?

Gunta Krumins: Message: Education and awareness are the key to detecting, managing and fighting Emotional Abuse and the worst form of it - Elder Abuse.

The strategy that Emotional Abusers use is simple in concept but the results are very convoluted and can be devastating for the victims.

But, if we know educate ourselves about the difference between a healthy and abusive relationship and what Emotional Abuse truly is all about, we will be able to identify situations of Emotional Abuse and increase our ability to know how to help ourselves or those who can't help themselves.

Message: What can society do? As a community we have to change our attitude toward Emotional Abuse and Elder Abuse. It is a community issue and not merely a private family matter. If we continue to ignore it or walk away from those who need our help, we just become enablers ourselves. Even without appropriate laws in place, the next best thing we can do as a community to stop the perpetrators is to expose them and treat them as suspects of a crime. By exposing them and having them face consequences for their actions, we're managing them and we're one step closer to breaking the cycle of abuse.