Emerging pop-Americana artist, Tara Kelly, has released a new music video for her single "The River." This dynamic folk/pop-country crossover is a stomp and holler break-up anthem with a melodic structure bound to catch any pop listener's ear. Her empowered female voice illuminates her lover's infidelity, while the lyrics portray a dark and stormy dive into a cascade of deception. "The River" is available now to download and stream, and watch on YouTube.

Co-starring Hunter Garner, the moody and vulnerable video follows Tara Kelly as she discovers and contemplates her partner's infidelity. Shots of the happy couple together are juxtaposed by somber yet stunning frames of Kelly as she comes to terms with the reality of her rocky relationship. Putting a new spin on cosmic country, Tara Kelly's songwriting style evokes a dark and mysterious edge as her lyrics reflect a gamut of lived experiences from heartache to mental health awareness, all of which are perfectly displayed in the striking video. "I've been writing and experimenting with sounds and deeply learning lessons about myself as an artist," she says. "It has allowed me to collaborate more effectively, speak my truth with kindness, and build my dream team of writers and creatives." Co-written with Stefan Pajaro-van de Stadt and produced by Alex Wilke, the driving acoustic guitar line in "The River" is laced with pedal steel licks, a cinematic violin, and full harmonies. The production is underpinned by the soft sounds of a storm rolling through, parallel to her southern gothic storytelling.

Hailing from a rural town in southern New Jersey, Kelly moved to Los Angeles to write and perform, securing a show at the iconic venue, Troubadour. Kelly was also asked personally by Rhett Miller of Old 97's to sing his hit duet "Fireflies" with him on a stop in Los Angeles after posting a cover of the song on her Instagram. Kelly's sound is deeply influenced by cosmic American music, fathered by Gram Parsons in the late 1960s and popularized by the likes of Linda Ronstadt and Brandi Carlile. She also draws inspiration from bands like Fleet Foxes, The Civil Wars, and Mandolin Orange; while her songwriting is shaped by the word-play of Kacey Musgraves, the raw vulnerability of James Bay, and the unabashed and fierce-feminine power of Maren Morris.

Highlighting themes of infidelity, heartbreak, shame, and love - Tara Kelly's epochal video "The River," is bound to make an impact. With her desert-chic appearance stemming from Stevie Nicks and Janis Joplin's fashion influences, this folk-Americana singer puts a new spin on romance and modern folklore.

Tara Kelly: My music is a blend of folk, country and pop with a bit of a mysterious edge to it. I like to call it Cosmic California Country.


Question: Can you tell us about The River?

Tara Kelly: I wrote "The River" from a deeply personal experience. I was dating someone who led me to believe he was falling for me in a very elusive way. His energy was alluring but I always felt like something was out of reach with him – like I could never fully see where he was taking me, or how deep I would be led into his waters, so to speak. I just knew I wanted to keep going, despite the risk it posed. Turned out that my intuition was right – he was already married and I was completely blindsided. Definitely couldn't ignore the truth when it was right there in front of me.

When I walked into the session the day we wrote it, I already had the title "The River" as a general concept, but wasn't sure exactly what I was going to do with it. I told my co-writers that story and they lit up. Stefan PVDS said "let's put that pain into this song" and we did.

Tara Kelly: I wanted the music video imagery to have the feel of the same world as an episode of True Detective or Vampire Diaries. To capture the meaning of the song (a love gone awry,) we shot at a beautiful southern-looking home in Venice, California that brought every visual I had in my head to life. It was important for me to show how love can be so intoxicating, and you can blindly ignore all the red flags in a relationship until it's staring you in the face. The reveal moment halfway through the video where I realize this is exactly how it felt for me when it happened in real life.

Tara Kelly: I hope my fans are empowered to trust their gut after listening to my music. I've learned that our intuition is incredibly powerful, and easy to ignore when we're moving through life at the speed of light. But when I slow down and pick up my guitar, I'm always suddenly hit with glimpses of the truth – that what I'm feeling is normal, and real, and not to be ignored. When one of my songs is playing in a car on a highway somewhere, I really hope the listener feels that too.


Question: Has moving to LA influenced your music?

Tara Kelly: LA is one of those places with a music history that penetrates your bones when you're here. Some of my favorite artists and bands like Fleetwood Mac, Eagles, Gram Parsons and Tom Petty let the mountains, the canyons and the desert wind speak to them and inspire their sound. The energy here is cosmic and grand, so it gives country / western music an entirely different feeling, often for a new set of listeners. I felt that when I came here 11 years ago and it deeply influenced the kind of music I listen to and write. The desert feels more like home for me than anywhere I've ever lived. 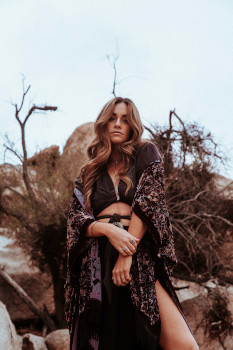 Tara Kelly: I LOVE being on stage – it's the most thrilling feeling there is. Songwriting and recording is equally powerful, but there's nothing like looking out into the crowd and feeling people relate to what you're singing. It's transcendent.


Question: What moment in your music career stands out the most?

Tara Kelly: Singing with Rhett Miller of Old 97's at the Troubadour was pretty unreal. His fans are so loyal and genuinely love the music. It was an honor to feel their support.

Tara Kelly: The songs themselves – when they're really good, they have a way of begging you to finish them. Whether in a session over a few hours or at home in your bedroom for days at a time. The tricky part about motivation is knowing that you are actually capable of shouldering that responsibility, and giving it your all every single time you write.

I always tell young songwriters something that one of my mentors, Tom Shadyac, told me. I'll paraphrase – "the genius may or may not come on any given day. It's simply your responsibility to show up."

Tara Kelly: I'm currently on a John Mayer kick – his music has been my quarantine soundtrack. Also just discovered Peter Bradley Adams and all of his music is fire.

Tara Kelly: I sang "Colors of the Wind" from Pocahontas when I was in elementary school and became instantly hooked on singing. A few years later I had the honor of taking the train from my hometown in New Jersey to visit Jive Records in NYC, where Britney Spears and Justin Timberlake were catapulting into stardom. The engineer let me eat from the bowl of Cheetos that were set out for Britney when she had been in that recording studio just an hour before I got there – I was so blown away by how good it felt to be in that space and learn about the business. I knew instantly that the music industry was for me.

Tara Kelly: I would love to write music and sing with James Bay – I deeply respect him as a songwriter and admire the way he genre-bends.

Tara Kelly: Getting to create every single day. Whether it's a new song or a video / photography concept, I'm constantly taking what's inside my brain and letting it take shape in the world. As a creative person, that's the ultimate gift.

Tara Kelly: I make sure I use my mornings to my advantage – I take the alone time to stay off of my phone so I can meditate, journal, read and reflect. This helps my songwriting so much – so I can really process my thoughts and experiences. Often I'll have writing sessions or work on the business side of things throughout the day. I try to always reserve sunset for a pure flow state with my guitar.

Tara Kelly: I've got a new song coming soon!!! SO excited for the fans to hear this one. Stay tuned.