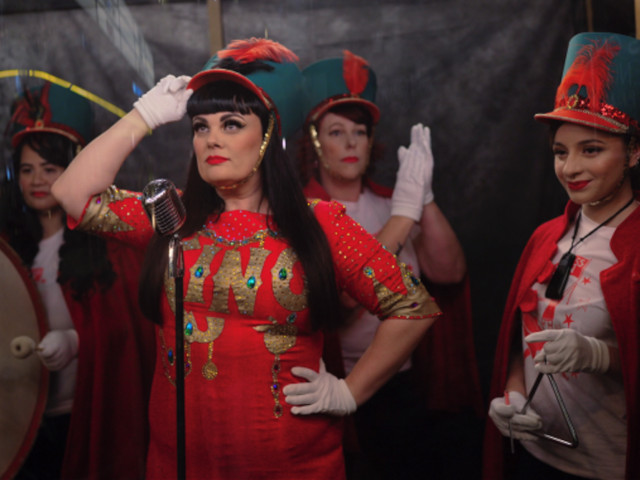 
"'Careless Woman" was inspired by a 1938 collection of 'Dating Tips' in Parade Magazine,"one of which read, 'Careless Women never appeal to gentlemen. Don't talk while dancing, for when a man dances, he wants to dance.' Director Abe Mora was inspired to bring this era to life and built an amazing coin-operated music box for me and my band of Careless Women to perform in, like a human jukebox. As the song plays, the women in the bar are empowered and begin to dance and throw off the oppressive rules of propriety."

"Careless Woman" marks the latest single from Neilson's brilliantly subversive fifth studio album, KINGMAKER, due Friday, July 15. Recorded at Neil Finn's Roundhead Studios in Auckland, New Zealand, KINGMAKER marks Neilson's most provocative and powerful collection to date. Fueled by the world-changing events of the past two years, the album's songs expose and explode the patriarchal structures that pervade the music industry, family life, and society as a whole. While Neilson has previously explored these themes on such acclaimed LPs as 2018's SASSAFRASS! (hailed by PopMatters as "a potent social and political statement dressed up in catchy melodies and infectious choruses that sometimes belie the more serious elements taking place deep within the choruses."), the new album draws these challenging ideas out even further, shining a dramatic musical light on what the late bell hooks referred to as "the politics of domination" that render women nameless and voiceless. Songs like "Baby, You're A Gun" and the cinematic title track "Kingmaker", see Neilson giving her own resonant voice to women everywhere – to their strength, power, fierceness, and resilience in the face of structural and cultural barriers to their full participation in society.

Born in Toronto, Tami Neilson has been performing for as long as she can remember, first alongside her parents and brothers in the Canadian country music family band, The Neilsons. From being cradled as a baby in the arms of Roy Orbison, singing with Kitty Wells at the age of 10, and opening for Johnny Cash in her pajamas at 18, she had already led an extraordinary life before leaving North America in 2007 to start her own family on the other side of the world in New Zealand, where she has resided ever since. It was there Neilson forged her own artistic path as a critically acclaimed solo artist and songwriter, busking on the streets of Auckland and performing in countless clubs before ultimately earning wide-ranging applause and myriad NZ-based awards for her booming vocal power and inventive, strikingly personal approach to country, rockabilly, and soul. 2020's CHICKABOOM! proved her most internationally praised work thus far, with No Depression declaring, "Neilson's phrasing is impeccable…she gets inside the song, turns it inside and out, and makes it her own. She can soar on the rockers, she can deliver the heart-rending ache of a ballad of lost love, and she can capture the playfulness of a schoolyard rhyme with a joyous seriousness." With her tireless work ethic, seemingly infinite musical gifts, and subversive songwriting approach, Tami Neilson has already found extraordinary success on her own terms. Now, with the groundbreaking KINGMAKER, she takes her music and message even further, using her one-of-a-kind voice to rattle cages and change the game for those who have been denied their rightful place at the table for far too long.