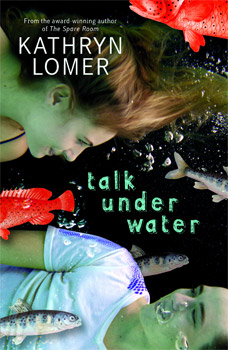 Will and Summer meet online and strike up a friendship based on coincidence. Summer lives in Will's old hometown, Kettering, a small Tasmanian coastal community. Both Will and Summer are missing a parent and needing a friend. Summer isn't telling the whole truth about herself, but figures it doesn't matter if they never see each other in person, right? When Will returns to Kettering, the two finally meet and Summer can no longer hide her secret. Can Summer and Will still find a way to be friends?

Set against a picturesque Tasmanian backdrop, Talk Under Water is about following your dreams, finding true friends and stepping up to meet life's challenges.

Kathryn Lomer grew up on a farm in North West Tasmania. She left school at fifteen and began the first of many and varied jobs in Tasmania and then overseas. She eventually went to university and became a teacher of English as a Second Language, which she taught for many years in Australia and Japan. She has a Bachelor of Arts in Literature and a Graduate Diploma in Journalism, Media and Communications. Kathryn's second young adult novel, What Now, Tilda B?, won the 2011 Margaret Scott Tasmanian Book Prize and was shortlisted in the 2011 Children's Peace Literature Awards. Kathryn has also published three collections of poetry: the first, Extraction of Arrows, won the 2004 Anne Elder Award and the second, Two Kinds of Silence, won the 2008 NSW Premier's Kenneth Slessor Prize. Her most recent collection, Night Writing, was published in 2014. Kathryn's other books include a novel, The God in the Ink, and a collection of short fiction, Camera Obscura.