Leona: The Die Is Cast 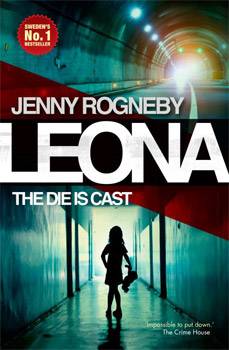 Leona: The Die Is Cast

A naked, bloody seven-year-old girl walks into a bank, clutching a grubby teddy bear, and plays a recording demanding money. No one dares intervene, in case the girl gets hurt. The girl leaves the bank, and disappears without a trace.

It's a daring robbery, and one trusted to Leona Lindberg, a unique investigator in Stockholm's Violent Crimes Division. But why is Leona ignoring witness statements, and calling in suspects on the barest thread of suspicion? When a second robbery takes place, how does she manage to be the first one at the scene?

Outside of the daily grind of her police work, Leona is dangerously attracted to risk, and is continually drawn to the poker table, despite the fact her child badly needs an operation. Leona's rash actions are motivated by a combination of childhood trauma, dissatisfaction with her middle class existence, and a genuine antisocial personality disorder.

Written by criminologist Jenny Rogneby, Leona: The Die Is Cast is a gripping crime thriller featuring an unusual heroine who holds onto reality only by the skin of her teeth. In life, as in poker, Leona is unwilling to fold, despite so much being at stake.

Jenny Rogneby began studying subjects such as criminology, sociology, law and psychology at Stockholm University where she later became a criminologist. For 7 years she has been working professionally as a criminal investigator at Stockholm City Police Department, investigating everything from thefts to robberies and murders. Her work inspired her to start writing and she formed the character LEONA, a criminal investigator with a dark past whose actions challenge social norms.

Question: What inspired the story of Leona: The Die Is Cast?

Jenny Rogneby: I was working as a criminal investigator at the Swedish Police Force when I started thinking about this story. Because of my work, I get a lot of ideas and this one was about a very special character, Leona, who is also a criminal investigator in Stockholm. I wanted to write about a bank robbery, but they are often depicted in films or in literature where there's a group of armed men with masks on, running into a bank, screaming and shooting all around them. I wanted the bank robber to be a vulnerable person. I then saw this little seven year old girl in my mind. She was carrying a teddy bear and a tape recorder, and walked slowly into the bank, and manage to leave the bank with millions. I had a strong vision in my mind about that scene, which also is the first scene in the book.


Question: Can you tell us about the careers you've had prior to becoming an author?

Jenny Rogneby: I am a criminologist and have been working seven years as a criminal investigator in at the Swedish Police Force in Stockholm. Before that I had a music career. I've been singing and dancing for many years, recording music and touring in Sweden and abroad. The biggest performance I did was as the opening act for Michael Jackson in front of an audience of 80 000 people in Tallinn. In Sweden I'm probably mostly known as one of the members of the girl group Cosmo4 which competed in the Swedish selection of the Eurovision Song contest in 2007.


Question: How did these previous careers inspire your writing?

Jenny Rogneby: What most inspire me is my profession as a criminologist and my work as a criminal investigator. But I do get inspiration from a lot other things as well, like films, news, other people and everyday life. I have a lot of stories in my head, I just wish I had time to write them all.


Question: What was the best part about creating the character of Leona?

Jenny Rogneby: The best part is that I can use my knowledge from my profession and work, and go beyond that and use my imagination to create its own world. Leona is a criminal investigator as I was, but she is a very unusual police officer. She has a dark past and had a lot of difficulties in her childhood that makes her act in a way that's not expected as a woman, a mother and a police officer. It is a very interesting process to write about a character that works with the same things as I do, but developing her character further to create a person that thinks and acts in different way.

Jenny Rogneby: When I'm writing I always know what I want to say. There were some issues that I wanted to raise. For example, I wanted Leona to challenge social norms. All her life she did everything in her power to live up to the perfect life, to be a great mother, a perfect wife, a good police officer, a nice citizen and so on, but one day she just had enough and couldn't handle it anymore. That's when she decided to break free from it all, and start a new life. That proved to be a very dangerous life.