Fair Food: Stories From A Movement Changing the World 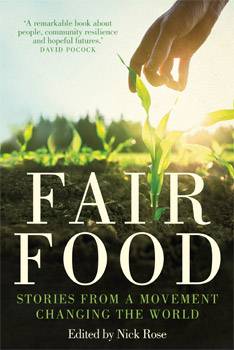 Fair Food: Stories From A Movement Changing the World

It's time to place control of our food system into our own hands. Fair Food is an inspiring revolutionary book about the change happening here and now in Australia. Edited by Dr Nick Rose, this is the first book ever written about Australia's fair food movement and tells the transformative stories of Australia's food pioneers and change-makers. It is about the toxicologist who turned his Melbourne backyard into a food forest; the 3rd generation dairy farmer who lost everything and then became a champion of community supported agriculture; the mother turned GM food debunker; a vegetarian turned free-range pig farmer; and the countless new communities who've forged their own food networks, food plans and food futures.

Fair Food celebrates a new way of living, where the food, farmers and eaters come first, not the supermarkets and profits.

Nick Rose is the National Coordinator of the Australian Food SovereigntyAlliance, and Food Systems Coordinator of a new National Food Network,-Sustain'. He was one of the developers of Australia's first crowd-sourced foodpolicy document, the People's Food Plan,and jointly coordinates Fair Food Week, now in its third year. He was theContent Director of Australia's first food politics documentary, Fair Food. Nick was awarded his PhD inPolitical Ecology from RMIT University for investigating the transformativepotential of the global food sovereignty movement. As a Churchill Fellow, hehas presented his findings on urban agriculture to a wide range of audiences inAustralia and continues to advocate for the adoption of the recommendations.