Tackling the blues - facts about depression 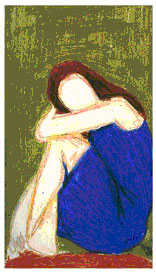 What is depression?
Depression is a common and genuine medical condition causing physical and psychological symptoms that require professional treatment. It is the leading cause of suicide in Australia, yet often goes unrecognised or treated3.


Who suffers from depression?
Depression can affect anyone from any educational or socio-economic background. Michaelangelo, Isaac Newton and Winston Churchill all suffered from depression, along with current Australian celebrities Rachel Griffiths, Garry MacDonald and Adriana Xenides2.

What causes depression?
Depression is often caused by a variety of internal and external factors, including:

Symptoms of depression
Depression creates both mental and physical symptoms in our thinking, feeling and bodily experience, as well as our behaviour. These symptoms can vary from one person to another. Symptoms may change throughout the day, but are usually worse after waking up in the morning.
Common symptoms include:


Often these behaviours are difficult to live with and cause significant concern to close family and friends3.

- a severe form of depression associated with hallucinations or delusions

- a severe form of depression often linked to emoional and physical slowing and severe disruption of sleep, appetite or concentration

- a consistently depressed mood for at least two weeks associated with a loss of pleasure in most activities, causing a loss of personal, social and work function

- chronically low mood often extending over years, resulting in persistent loss of work and social function
- the most common form of low mood associated with many physical health problems and common social stressors

- depression as part of a more severe illness associated with high and low periods of moodiness, varying from mild to very severe3

Key life stages of depression
Depression may change its form at different stages of the life cycle, as follows:

- common onset which may be associated with loss of energy and social withdrawal. May also result in disruptive behaviour or drug and alcohol abuse

- common after childbirth, varying from mild to very severe

- may become more severe in some women after menopause

- may occur for the first time in later life, particularly in association with certain types of physical illness, including heart disease and stroke3.

Antidepressants can help to restore these deficiencies by influencing certain chemical messengers in the brain and helping to re-establish normal brain functioning.


What treatments are available for depression?
There are several different treatments available for depression which are often used in combination. The use of pyschotherapy (counselling or 'talking therapy') and antidepressant drugs is well-supported by a large base of empirical evidence. There are also various self-help treatments, such as taking regular exercise, eating a balanced diet and getting sufficient rest2.


What treatment has recently become available for depression and how does it work?
Avanza (mirtazapine) has recently become available for the treatment of depression in Australia. With its broad action, it stimulates chemical messengers in the brain and helps to re-establish normal functioning. Its two way action means that it increases the levels of two chemical messengers - noradrenaline and serotonin - which are important in controlling mood.

The product should be taken with water at the same time everyday for at least six months, or as long as recommended by a doctor to prevent relapse. It is not addictive and long-term treatment should not have any negative effects on the patient4.