In collaboration with Australian Beef, chef Andy Allen has created 5 delicious recipes that put midweek home dinners back on the table.

To help Aussies fall back in love with homecooked dinners any night of the week, Australian Beef has partnered with MasterChef-winning chef Andy Allen, to create delicious and easy midweek recipes using Australian Beef – the Greatest Meat on Earth.

Throw some vegetable oil into a medium heat pan, add the beef mince and cook until brown.
Meanwhile, chuck the cashews in another pan and cook for a few minutes until brown.
Finely dice the ginger and add to the cooked mince. After a couple of minutes, pour in the sweet soy and deglaze. Deglazing simply means add sauces or liquid to your pan to steam off any bits of flavour that are stuck. As we are only using five ingredients, it's essential to pick up as much flavour as possible.
Continue to toss the ginger and mince in the remaining sweet soy until most of the liquid has evaporated. Throw the toasted cashews into the pan to collect the flavour, mix them in, put to the side.
Lastly, wash and separate baby cos leaves so that you have 8 cups, fill with the sweet soy beef and finish with a squeeze of lime! 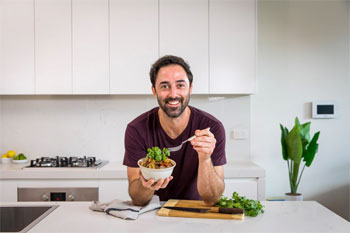 Aussies Missing Out On the Benefits of Homecooked Dinners

Takeaways and TV meals are on the menu as Aussies struggle to find the time to cook dinner during the week, missing out on the health, social and financial benefits of enjoying a meal with friends and family around the dining room table.

The new research conducted by Australian Beef found that socialising with friends (35%), the pressures of working late (53%), and after school activities (19%) are leading Australians to abandon cooking during the working week. Instead, over half (58%) are ordering in takeaway and one in three (36%) are dining out at least once a week, forking out upwards of $4,0001 a year on -easy' dinner options.

When eating in, it appears that distractions are getting in the way of Australians enjoying a social experience around the dinner table. Over half (51%) are not averse to eating their evening meal on the couch watching TV, increasing to 66% amongst young couples, and around one in five (19%) typically eat alone during the week, missing out altogether on the benefits that come with sharing a meal.

Dr Fiona Martin, psychologist at Sydney Child Psychology Centre stresses the importance of eating dinner around the table: 'For the family, eating at the dinner table promotes health and mental wellbeing benefits; not only is it a great way to spend quality time together but it also develops communication and social skills for children.

'For young adults or individuals, such as those in shared houses, the act of eating at the dinner table promotes mindful eating and is beneficial for health and wellbeing. In contrast eating in front of the TV is passive and anti-social, potentially having a negative impact on relationships and how we interact in the longer term".

While the majority of meal preparers have the best intentions when it comes to cooking, with 57% doing their weekly shop on the weekend, one in three (34%) full time workers only start to think about their evening meal at lunch or afterwards, with 18% of those late planners leaving the decision making until their journey home. When faced with the task of cooking a meal after the commitments of the working day, around one in four (27%) are left feeling uninspired, often reverting to their tried and tested repertoire of no more than six recipes. Over half (58%) are also looking for their dishes to provide multiple meal solutions, including lunchtime leftovers (39%) or dinner for the following day (15%).

While the mid-week dinner is in decline, the report by Australian Beef found that 82% of time poor home cooks would like to expand their midweek repertoire, but it's got to be easy (67%) and quick to prepare (60%). During the working week the ideal midweek recipe should also have no more than five ingredients and take less than 30 minutes to both prepare and cook.

Popular midweek dishes generally stay true to tradition with meat and three veg (69%) topping the list, followed by Spaghetti Bolognese (67%) and stir-fry (64%). It appears that families are also adopting the -Taco Tuesday' phenomenon, with over half (53%) listing it as a regular weeknight meal.

A nutritionally balanced meal is not always on the cards however, with the research finding that nearly a fifth of Aussies would rather choose an instant fix meal option, such as breakfast cereal or avocado on toast, rather than getting out the pots and pans after a long day.

According to Dr Martin, when it comes to busy work and personal life, it's important to set boundaries and remember the benefits of cooking and eating meals during the week. She says: 'Young adults are looking for quick and easy solutions to their midweek meals, which often means they stick to takeaways, order via apps or pick up ready meals from the supermarket. While it addresses their immediate need, the issue is that it may have negative implications on health and mental wellbeing for the future.

'For couples or friends, the act of cooking is a form of teamwork and important for promoting healthy relationships. Preparing a midweek meal together promotes good conversation skills and is a brilliant form of quality social time."

To help Aussies expand their repertoire and rediscover the midweek dinner, Australian Beef have teamed up with former Masterchef winner and owner of Three Blue Ducks, Andy Allen, to create five quick and easy everyday dishes. The recipes can all be prepared in less than 30 minutes and use just five ingredients, making them ideal for Aussies cooking for the family or sharing with friends. To view full recipes, visit www.australianbeef.com.au