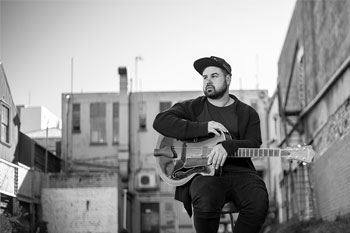 Sydney based artist Solomon Harper grew up in the central suburbs of Auckland City listening to the innovators of every genre and era, style and swagger. Influences include Alabama Shakes, Ray Charles and Al Green to name but a few.

He is the new father of one bonny baby girl and a gut wrenching new EP, All The Things We Made, featuring the single, -Bones', you'll want to download yesterday.

Solomon's musical evolution started young drumming for Punk bands in his teens, belting out Pennywise anthems and NoFX fixtures. Discovering Motown magic and smooth soul in his twenties transformed his style from rough and roll to sultry soul. Song writing skill has developed during the course of Solomon's real world career in the coal fields of composition, tending bar, construction, kitchen dish bitch and all the highs and lows, loves and losses between.

Working between colonies he has cut his teeth in the real world jamming with rock royalty in clubs and pubs hosting live performances in Sydney, Auckland and anywhere good sounds are appreciated and encouraged.

With tours and guest appearances pending Solomon will soon be upstaging established artists in their home territory, whether in Taihape, Towoomba or Timbuktu.

With echoes of Paolo Nutini and shades of Kings of Leon, Solomon delivers an original soul stirring set including -Bones', -Devils Son', -Tale of You', -Ghosts' and -All We've Got', all destined to regularly repeat on your MP3 player of choice.

Solomon gives his gat' a voice carved out of the underbelly of street life, the sweet life and occasional strife experienced on both sides of the ditch.

His hard work, dedication and grit are etched into every note with love and lust, sweat and beers.

For Fans Of: Paolo Nutini | Kings Of Leon | Alabama Shakes

'Bones" by SOLOMON HARPER will be released on 7th July.